Lovely photo of the knight 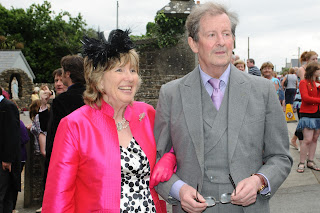 Tom Fitzgerald has kindly shared with us his lovely photo of the late Knight of Glin pictured with his wife, among his friends and neighbours at the wedding of his daughter.
Posted by Listowel Connection at 19:26 No comments: Links to this post

A Knight of The Realm and a knight of the roads

Firstly Vincent has provided me with the source for the old song about Lord Listowel. It comes from the pen of D.C. Hennessey and is to be found in The Lays of North Kerry edited by Pádraig deBrún. I might get back to D.C. Hennessey at another time when Vincent gives me all the lowdown. I have a few more songs as well, all equally long and saccharine sweet.

Now to some more of Vincent's memories, evoked by the recent passing of The Knight of Glin.

Vincent Carmody remembers,
I have a personal story about the late Knight of Glin. It was at  the time when I was gathering photographs in preparation for the printing of North Kerry Camera. I made contact with the Knight through the good offices of Padraig De Brun.
I explained to the Knight the type of historical photographs that I required. Without hesitation he invited me down to Glin Castle and gave me permission to look through the various photographic albums stored in the library. Accompanying me, on a cold February night , was ace camera woman Gemma Hannon (mother of the lovely Aoife, just returned from representing Ireland in faraway Brazil in the Miss Universe competition).
We copied many of the prints. Afterwards the Knight gave us a tour of the castle and invited us to sup some hot punch in the the sitting room in front of a blazing log fire. Marvelling at the size and grandeur of the place, I remarked to the Knight, “How did it escape from damage during the troubles?”  He replied, " My grandfather, who was wheelchair bound, was in the castle one night when the boys (the IRA) burst in to the castle. After ordering the staff to leave, they found the Knight in his rooms.
“What do ye want?” asked the Knight.
“We have come to burn the castle,” said the volunteers.
“Alright then, ye can burn me inside it also, “was the Knight’s reply.
That night, when we were in the castle, I asked Desmond Fitzgerald what was their reply. He said, the volunteers told the Knight that they would have to go back down to the village to replan. Luckily, they never went back to the castle and so this architectural gem has remained to this day.
There is a another story told, that a “Knight of the Irish roads”, one Michael Faulkner (who was a personal friend of the last Knight’s father) was in Shaughnessys pub in Glin one night. Some local man, entertaining American cousins decided to poke fun at Michael.
"They say you are a friend of the Knights" asked the local, of Mikey.
" Aye, you’re right sir" said Mikey.
"Well, if you are, how do you address him so?" said the local.
Mikey thought, and said, " Well, if I meets him by day, I'd say, “Goodday Knight,” and when I sees him by night, I'd say, “Goodnight Knight".
Desmond John Villiers Fitzgerald, 29th Knight of Glin was a friend of the people of Glin and of the Irish Nation. May he rest in peace.
Posted by Listowel Connection at 08:25 No comments: Links to this post 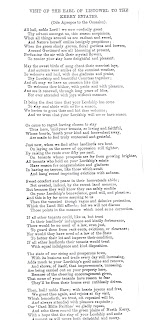 I hope you can all see the song this time. Apologies for last  time. I could see it so I presumed everyone could. Further apologies for the tiny size of it. you'll have to zoom in to read it.
To do this;
Double click on the song.
You should get it in a new window with a little magnifying class with a plus in it.
Click the magnifier over the text and hey presto! it's readable.

I hope you think it's worth the trouble.
Posted by Listowel Connection at 11:59 No comments: Links to this post

Desmond John Villiers Fitzgerald, also known as the 29th Knight of Glin, has passed away.
He was the father-in-law of British actor Dominic West.
The Knight of Glin is an ancient Irish noble title handed down from chieftain times.
It is still recognized by Irish governments.
Paying tribute to Mr FitzGerald, the Irish Georgian Society said that Ireland had lost one of its champions of the arts and heritage.
''A passionate man, the Knight tirelessly worked for the future of Irish country houses, their contents, parks and gardens showing the way with the restoration of Glin Castle, and making it home to his collection of Irish paintings, furniture and the decorative arts,'' the society said in a statement.
It said that his ''unique contribution to Irish scholarship, indicated by the depth and breadth of his academic output (books, catalogues, articles), is awe-inspiring.
''Desmond was a man of immense charm as well as erudition; he cherished his beloved wife, Olda, and daughters Catherine, Nesta and Honor.”
His daughter Catherine is married to Mr West.
- Independent.ie reporters
There has been much coverage over the weekend of the sad passing of the last Knight of Glin. The knight had strong connections with Listowel. He was a chairman of Listowel Writers' week. I remember a very pleasant bus trip to Glin during one Writers' Week. The Knight opened his castle for the occasion and we got a guided tour of the buildings and grounds.
But, of course we have our own links to the British aristocracy in the person of  Lord Listowel
Tom Fitzgerald (whom I don't think is related to the late knight) came upon this sycophantic song recently. I couldn't find anything on the web about the visit that is mentioned but as the saying goes "What's seldom is wonderful" and some bard surely got well rewarded for this lay,

Posted by Listowel Connection at 10:03 No comments: Links to this post 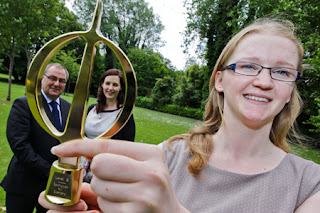 
(Story copied from Ceist e- newsletter)
Posted by Listowel Connection at 17:03 No comments: Links to this post 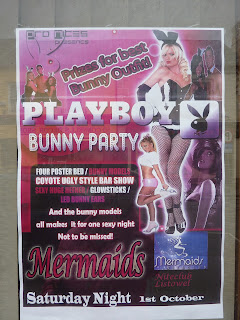 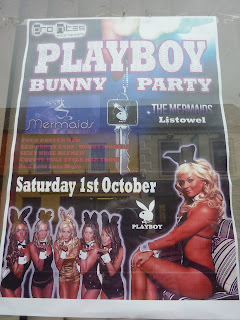 Haven't we come a long way since the days John B. recounted of the parish priest in the dancehall prodding his umbrella between couples he thought were dancing too close.
Bunnies in Listowel, what next?
Remember where you heard it first!!!
Posted by Listowel Connection at 14:13 2 comments: Links to this post

The mystery of Grigero solved by our trusty sleuth

Just in from Vincent...
In response to a comment from John and Noreen I have been on the detection trail. The person whom I think John remembered was indeed living in that locality. His name was Timothy McMahon and he  was know locally as Grigero. He was married to a Carmody woman from Knockanure and had at least two sons, one of whom was reputed to have a fine tenor voice. Grigero was a very fine fiddle player and used to play at wren dances, wakes or weddings.
They lived in a small house on the Kerry side of the Kerry/Limerick border on the Athea road. He is reputed to have learned his music from a neighbour, a man called Mick Taylor, who was a gifted musician but cursed with a longing for the drink, especially when he did not have to pay for it.
It was reported that Mick Taylor had died and the following occurred.
Batt. Fitzgerald, a publican of the lovely village of Athea, was on his daily walk when he met with a man, known as the The Poet Enright from Knocknaboul, coming on his ass and car to do his shopping. Enright was similar to Paddy Drury for delivery of instant verse.
Fitzgerald said to Enright,
"Poor ould Taylor is dead"
and back came Enright's reply.
"He is dead but not forgotten
Never shall his memory fade
Bitter memories will always linger
Around the pubs he never paid"
Posted by Listowel Connection at 10:26 1 comment: Links to this post

Something old, something new

Today Vincent shares with us another of his insightful but somewhat sad memories of Listowel  in the not so long ago.
Vincent Carmody's Recollections
Listowel’s Private Maternity Homes.
The blog of Wednesday 21st September contains a nice picture of the highly decorative house front of 60 William Street. Now containing the chiropody practice of Gina Scannell, this house was once, as the blogger rightly named it, a cottage maternity home.
This maternity home was run under the supervision of Nurse Nora Chapman (nee Moriarty) from the mid 1940’s until the late 1960’s. Nora trained and worked as a midwife in England. She had returned to her hometown to take up a position in the maternity unit of the newly opened Listowel District Hospital in 1940.  Some years later she decided to open up her own maternity facility at her home in William Street. She was assisted here by her daughter, Doreen, who had also trained as a nurse. The doctors who attended here were Dr. McGuire and Dr. Corridan.
There was an identical cottage at number 58, long since knocked, also owned by the Moriarty family, (where the Chinese Restaurant is now and which housed at various times, Mangan’s Garage, Maloney’s Garage and Printing Works and Lonergans Supermarket)
Another such maternity home was operated at 65 Church Street, this under the supervision of Nurse Catherine O Donavan (nee Adams). She was originally from Glin, Co. Limerick. Catherine, who had done her training in the Rotunda Hospital in Dublin, applied for the position of District Maternity Nurse in Glin. Failing to be appointed there; she applied for a similar position in Listowel, where she was successful. She opened her maternity home in the early 1920’s and it closed when she retired back to her home village of Glin in the early 1960’s. One of the doctors who attended at this home was Dr. O Connor of the Square. A constant and faithful employee of Catherine’s, was a well known popular local woman named Hannah Irwin. When Nurse O Donavan left Listowel, Hannah went to reside at a house in Colbert Street with her long time friend, Bridie Burns.
A tragic event which occurred on July 1st 1949 must have had a deep and lasting effect on Nurse O' Donavan. Her nephew, John Gabriel Commons, was brought from Dublin on the previous evening by his father and mother for his summer holidays in Listowel. The next afternoon he joined with several other boys from Church Street who were going swimming in the local river. They went to a location known as the Corporals. As they swam John Gabriel got into difficulty and had drowned before he could be rescued.
The third such maternity home operated both as one and also as a cottage hospital. This was Greenlawn Nursing Home, (afterwards The Kennedy Home) this was both owned and operated by Dr. Johnny Walsh.
And now to something new. 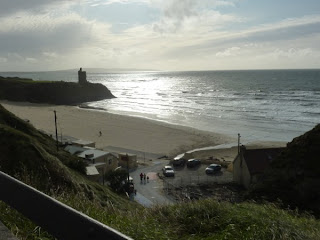 Yesterday was one of those "pet days", as we used to call a fine sunny day appearing out of season, so we headed out to Ballybunion. Isn't it lovely? 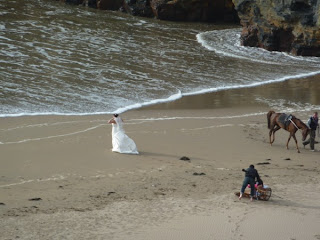 While a horseman exercised his horse, a bridal party were setting up a photo shoot. 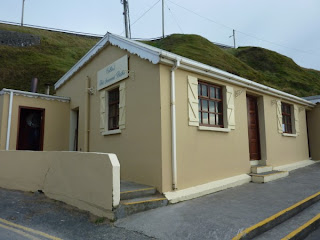 Collins's was enjoying a steady trade on its last day of opening. A sign in the window wished us all a good winter in its inimitable Kerry way. 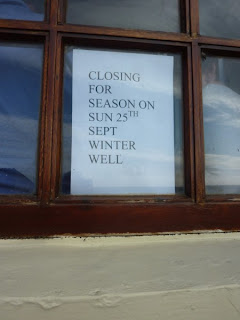 Posted by Listowel Connection at 17:35 No comments: Links to this post