Billy McSweeney sent the following story to give you a chuckle this fine morning.

I was told a story by my Uncle Timmy Gleeson some years ago.
His father, E.J. (Ned) Gleeson was the Listowel Town Clerk in the early 1900’s. One could imagine that this was not a particularly onerous job at that time and those of us who have plenty of time to spare well know the tendency to let things pile up. ‘Sure it won’t take long to catch up’.
Ned wasn’t careless however. The ‘Boots’ at the Listowel Arms Hotel at the time was John Murphy, father to ‘The Dummy’ Murphy, the tailor in Convent Lane who some of the older readers may remember. Now, Ned had John primed to come and tell him whenever somebody ‘important’ arrived on the evening train – especially if such a person could possibly be a Local Government Inspector.
One evening John arrived up to Gleeson’s pub in William Street – now Jumbo’s Fast Food Emporium. He told Ned that a gentleman had arrived that evening that had the stamp of being a dreaded Local Government Inspector. This created a large problem for Ned as the Books were at this time so far behind that even if he worked all night he wouldn’t get them up to date.
Never one to be fazed, Ned got up early the following morning and went to work. He took with him a jute sack which he wetted and stuffed up the chimney and proceeded to set and light the fire beneath. Naturally, the whole room filled with smoke. At 9.00am sharp there was a commanding knock at the door which Ned answered, opening the door with a handkerchief covering his mouth and nose. The gentleman introduced himself as expected and asked Ned what was going on with the smoke.
“I have been asking the Bord of Works to clean the chimney for weeks”, offered Ned.
“It is intolerable to have to work in these conditions and I can only apologize to you, sir”
The Inspector then huffed up and said that he was not prepared to spend any time in these conditions. “You can tell the Bord of Works that I will be back here in two weeks and if this chimney is not cleaned by then I will make an official complaint and somebody will have to answer for it”
“Good day, Mr Gleeson”
“Thank you, sir” answered a delighted Ned. 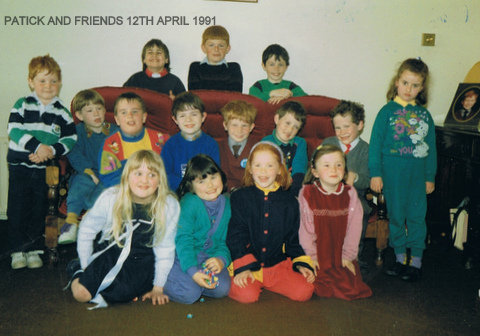 This photograph from 1991 was sent to me by Noreen Brennan. It will give a few former residents of Cherrytree Drive something to smile at. Weren't they sweet?

Joanne Dillon, a New York lady with a strong North Kerry connection shared with us this link to a really interesting article about the genealogy group of which Joanne is a member. Invaluable information for anyone in the U.S. who is researching their Irish or indeed British ancestry.

Joanne has also sent me an account of her trip to Ellis island to share with you. I will include that next week when we have settled into Lent and I have put aside for a while my copy of Kevin Danaher's fascinating The Year in Ireland.
__________

Finally for those of you who live in the U.K. or Ireland, who love words and numbers and who are free to watch afternoon T.V. there is an Irish contestant on Countdown who is amazing. Peter Lee's lightning fast conundrum solving has to be seen to be believed.