I know the Kerry Rose 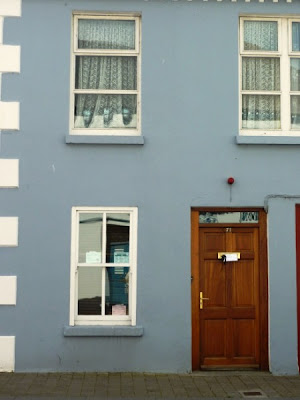 Listowel came to a halt on Saturday for the funeral mass of Sinéad Halkett who died before her time at age 33. The outpouring of support and love for the Halkett family on Saturday may have brought them some small crumb of comfort at this awful time. Words are totally inadequate. My only prayer for them is that, in time, it will not hurt as much as it does today. 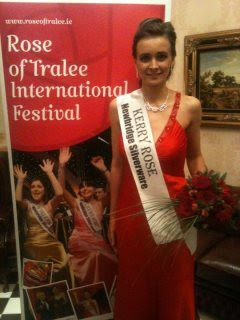 Now to news of another of my past pupils. The lovely Annmarie Hayes of this parish has been chosen to represent Kerry in The Rose Of Tralee competition. She is a beautiful girl who embodies all the characteristics which are sought in this competition. I hope she wins.

Remember my post last week about Con Houlihan and The Wild Colonial Boy?
My friend, Julie, enjoyed the post and she filled me in on the Australian version of the ballad and the story behind it:

"The Wild Colonial Boy" is a traditional Irish–Australian ballad of which there are many different versions, the most prominent being the Irish and Australian versions. The original version was about Jack Donahue, an Irish rebel who became a convict, then a bushranger, who was eventually shot down by police. This version was outlawed as seditious so the name changed. The Irish version is about a young emigrant, named Jack Duggan, who left the town of Castlemaine, County Kerry, Ireland, for Australia in the 19th century. According to the song, he spent his time there 'robbing from the rich to feed the poor'. In the song, the protagonist is fatally wounded in an ambush when his heart is pierced by the bullet of Fitzroy.

The Australian version is quite different. It is about a boy named Jack Doolan, born in Castlemaine. The poem then continues to tell of his exploits without mentioning his moving to Australia, which implies that the Castlemaine in question is that in Victoria, a state of Australia.

The Oxford Companion to Australian Literature reports the following about the poem/song.

One of Australia's best-known folk-songs, tells the story of an Irish-born bushranger, named Jack Doolan, who terrorises the squatters, holds up the Beechworth mail coach in the 1860s, robs Judge MacEvoy, and is eventually killed when surrounded by three troopers, Kelly, Davis and FitzRoy, to whom he refuses to surrender. Several versions of 'The Wild Colonial Boy', which is often sung to the Irish tune 'The Wearing of the Green', e.g. by Ned Kelly at Glenrowan, have survived: in some of them MacEvoy is called Macaboy, and Jack Doolan is variously Jim or John Dowling/Duggan/Dublin/Dolan/Davis. That the hero of the song always has the initials 'JD' has led many folklorists, e.g. John Meredith in The Wild Colonial Boy (1982), to argue that the Wild Colonial Boy was a fictitious character and that the song is an 1860s variant of the 'Bold Jack Donahoe' (see Donohoe, John) cycle of songs and ballads, which, as a result of oral transmission, acquired a new set of characters and events. The argument is strengthened by a chorus beginning 'Come along, my hearties, we'll roam the mountains high,/ Together we will plunder, together we will die', which is common to versions of both ballads, and by the fact that the songs are traditionally linked in Irish folk-music. John Manifold, however, in Who Wrote the Ballads? (1964), speculates that there was a bushranger of the 1860s named Jack Doolan and that his experiences were celebrated by taking over the existing Bold Jack Donahoe songs. Further investigation has established a Judge Macaboy and families of Dowlings, Doolans, etc. in the Beechworth district in the 1860s, but as yet no bushranger named Doolan has emerged. Whatever the origins of the song, 'The Wild Colonial Boy' is well known overseas and is sung by John Wayne in the film The Quiet Man. In Australia, its popularity is such that 'wild colonial boys' became a phrase describing the bushrangers in general, as in Frank Clune's book Wild Colonial Boys, and, indeed, any Australian sharing their bravado and daring.

THE WILD COLONIAL BOY - Anonymous
'Tis of a wild Colonial Boy, Jack Doolan was his name,
Of poor but honest parents he was born in Castlemaine.
He was his father's only hope, his mother's pride and joy,
And dearly did his parents love the wild Colonial Boy.

Chorus
Come, all my hearties, we'll roam the mountains high,
Together we will plunder, together we will die.
We'll wander over valleys, and gallop over plains,
And we'll scorn to live in slavery, bound down with iron chains.

He was scarcely sixteen years of age when he left his father's home,
And through Australia's sunny clime a bushranger did roam.
He robbed those wealthy squatters, their stock he did destroy,
And a terror to Australia was the wild Colonial Boy.
In sixty-one this daring youth commenced his wild career,
With a heart that knew no danger, no foeman did he fear.
He stuck up the Beechworth mail-coach, and robbed Judge MacEvoy,
Who trembled, and gave up his gold to the wild Colonial Boy.

He bade the judge "Good morning", and told him to beware,
That he'd never rob a hearty chap that acted on the square,
And never to rob a mother of her son and only joy,
Or else you might turn outlaw, like the wild Colonial Boy.

One day as he was riding the mountain-side along,
A-listening to the little birds, their pleasant laughing song,
Three mounted troopers rode along - Kelly, Davis and FitzRoy -
They thought that they would capture him, the wild Colonial Boy.

"Surrender now, Jack Doolan, you see there's three to one.
Surrender now, Jack Doolan, you're a daring highwayman."
He drew a pistol from his belt, and shook the little toy,
"I'll fight, but not surrender," said the wild Colonial Boy.
He fired at Trooper Kelly and brought him to the ground,
And in return from Davis received a mortal wound.
All shattered through the jaws he lay still firing at FitzRoy,
And that's the way they captured him - the wild Colonial Boy.

The lyrics are as follows:

Hello fellow Finbarrians
The following message is not only for your perusal, but also one which you can pass on to all your fellow Irish friends here in Perth.
The WA police are extremely unhappy and appalled by the antisocial behaviour which is taking place all too often on the streets and in the pubs across Perth and its suburbs, especially in the Northbridge area [above]. Even Rental Agencies are not as willing to rent properties to Irish people here in Perth, as they are getting destroyed during parties, and being left in terrible conditions once vacated.
We have been advised, that over the next few weeks, the Perth Police will be, at random going around to all of the GAA Clubs and talking to club members, advising them of same. They want to get the message across to all Irish in Perth that what has been going on is just not acceptable, and if it continues there will be consequences.
Police will be adopting a Zero tolerance policy for any antisocial behaviour. If individuals don’t abide by the law, and take heed of move on notices, their visas WILL firstly be investigated, before court action, meaning that deportation would be the final conclusion. This is the last thing anyone of us or our fellow Irish counterparts here in Perth want.
This a very serious matter, and I hope that you and your friends will now be aware of the consequences should occurrences with the Police occur. Not something we are encouraging that is for sure.
Please spread the work to your fellow Irish, as this is affecting all of our reputations here not only the people who are causing the trouble.
Many Thanks for reading the above.
Regards
Linda H

President St. Finbarrs GFC
>>>>>
What a pity that a small few are spoiling it for so many.
Posted by Listowel Connection at 07:30