One is nearer God's heart in a garden....

Listowel is resplendent these days, thanks in the main to the beautiful floral displays around the town. 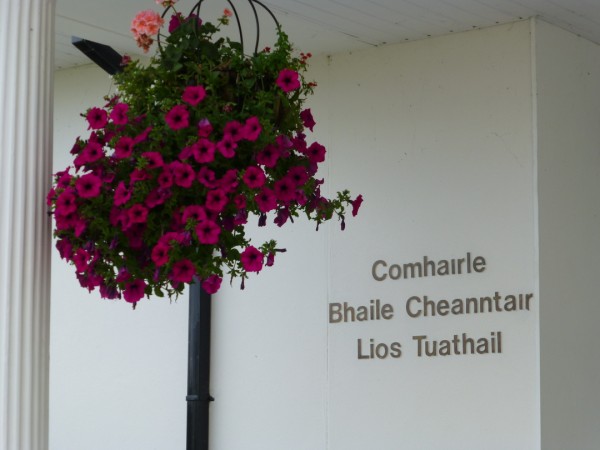 The planting work is being done by Listowel Town Council. The following are a few photos I took at Áras an Phiarsaigh. 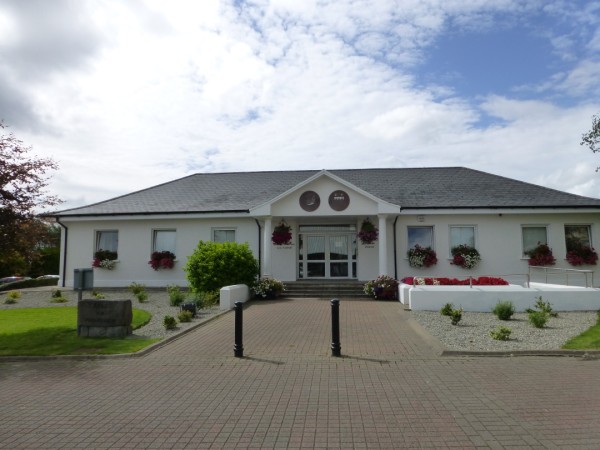 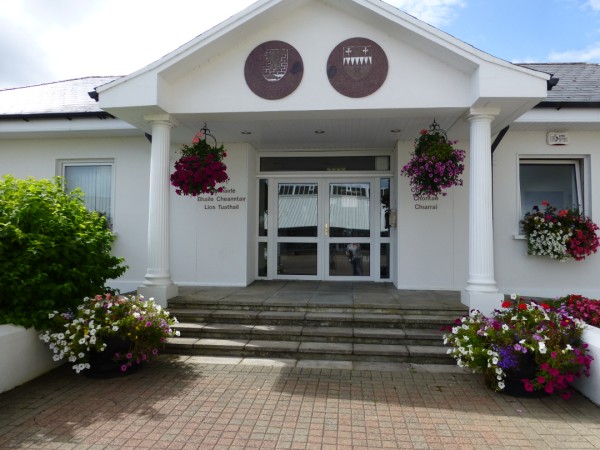 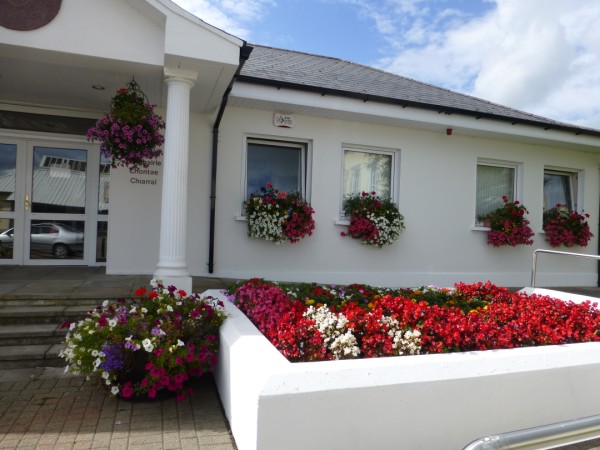 When I was photographing developments at the old mart site I spotted these flowerbeds at the entrance. 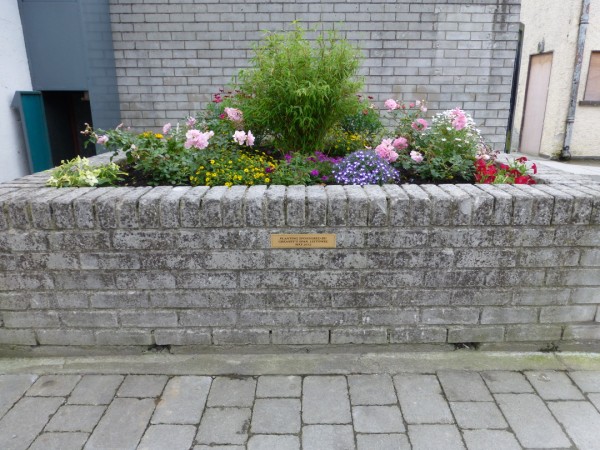 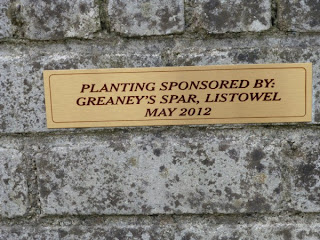 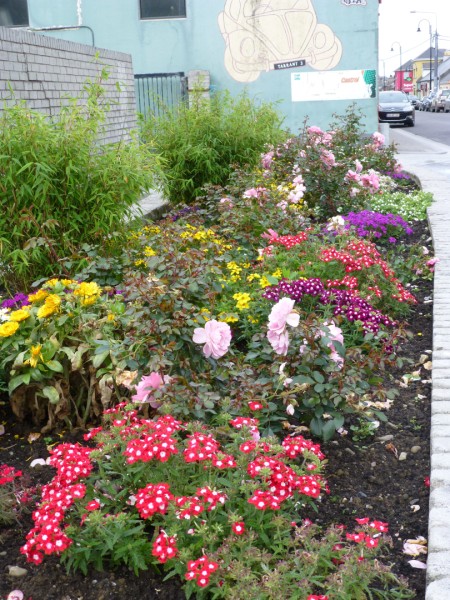 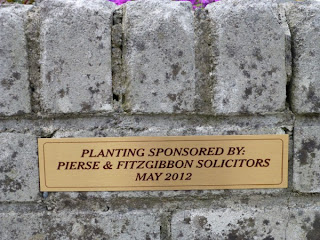 If the moon landing had failed, the U.S. had prepared this statement for President Nixon to deliver. Chilling!
(Apologies that it is so small; this is as big as I could make it) 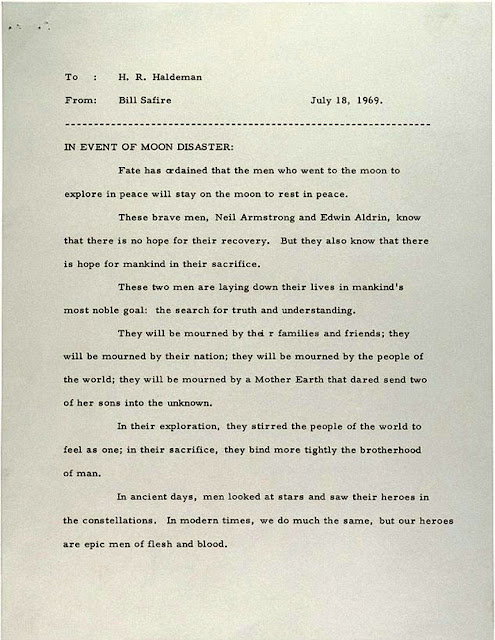 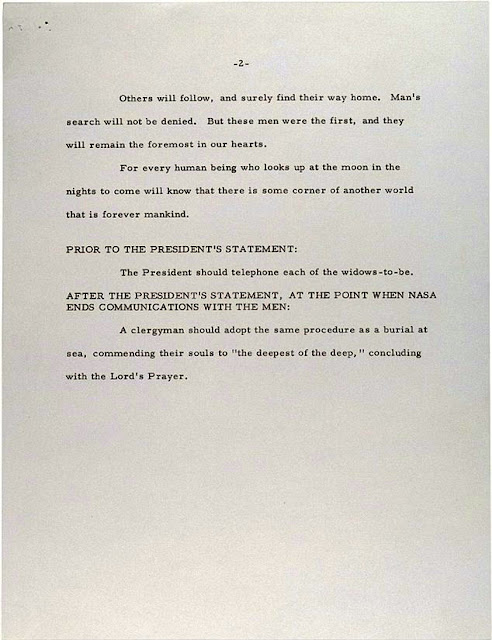 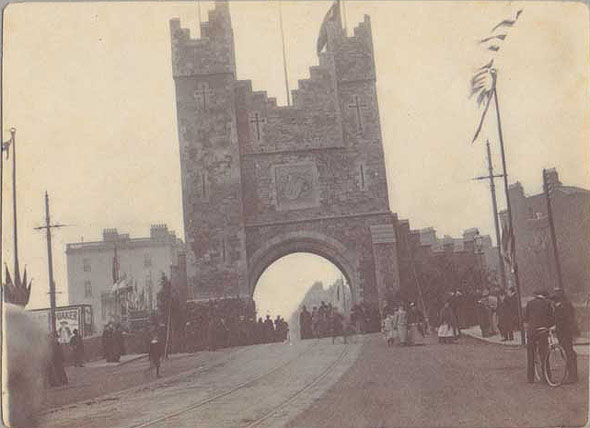 This is the temporary gateway erected for the visit of Queen Victoria to Dublin in 1900. A ceremonial affair, the Queen was to enter the city boundaries and be given the keys to the city by the Lord Mayor and Aldermen. Described in The Irish Times as “the old city gates, a handsome representation of which is to be erected at the entrance of the municipal boundary at Leeson Street Bridge [Dublin].
<<<<<
The following letter to the Irish Times has gone viral on the internet. 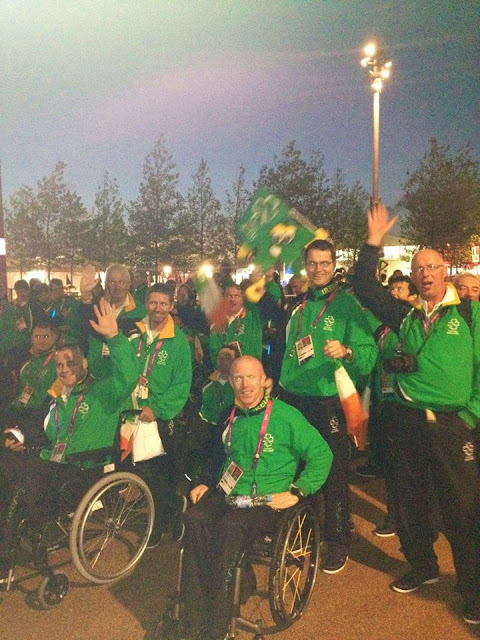 Our athletes on way to opening ceremony


This was taken in 1914. It is the Tralee Battalion of The Kerry Brigade of The Irish Volunteers. The photograph is here;
http://www.bureauofmilitaryhistory.ie/

There is lots of interesting stuff for the historian on the site. Jer. Kennelly found the following testimony:

“I was born in the parish of Abbeyfeale on the 31st
October, 1900, and was one of a family of three boys and
three girls. My parents, who were farmers, sent me to
the local national school until I was fourteen years of
age, after which I attended a private school run by a man
named Mr. Danaher. While attending the private school,
I became an apprentice to a chemist in the town of
Abbeyfeale whose name was Richard B. Woulfe. After
completing my apprenticeship, I was retained in his
employment for some years until I was forced to go on the
run during the Black and Tan terror.
Mr. Woulfe's wife was Miss Cathie Colbert, sister
of Con Colbert (executed after Easter Week 1916) and
James Colbert, and cousin of Michael Colbert who later
became Brigade Vice 0/C, West Limerick Brigade. The
Woulfe's were great supporters of the Irish independence
movement and their shop and house, from the earliest days
of the movement, became a meeting place for men like Con
Colbert, Captain Ned Daly and others who later figured
prominently in the fight for freedom.
A Company of the Irish Volunteers was formed in
Abbeyfeale in May, 1914. I did not become a member at
the time. The strength of the Company was about three
hundred. A Dr. Hartnett was the chief. organiser, and
an ex British soldier, named James Wall, was one of the
drill instructors. They did not hold together for long
and ceased to exist early in the year 1915, after John
Redmond's speech in the House of Commons in which he
offered the semi-trained Volunteers of Ireland to fight
for the freedom of small nationalities.
Some time later in the year 1915, Ernest Blythe
visited Abbeyfeale and reorganised the Company. I was
one of nine members who joined the Company at its inception.
I was only fifteen years of age at the time. A man named
Thomas Fitzgerald of the Railway Bar, Abbeyfeale, was our
first Company Captain.
A short time previous to Easter Week, 1916, Captain
Ned Daly and Con Colbert visited Woulfe's where I was
employed. They were in uniform.
On Thursday of the Holy Week previous to Easter Week,
the late Batt O'Connor, who later became T.D. for a Dublin constituency,
visited Woulfe's on his way from Dublin to Tralee with dispatches."

Can anyone help this lady with her Hennessey relatives? 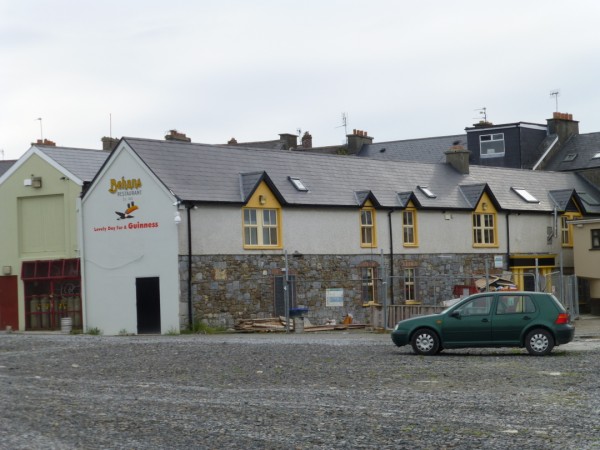 This is the new Behan's restaurant which is an amalgamation of The Horseshoe and The Keg. 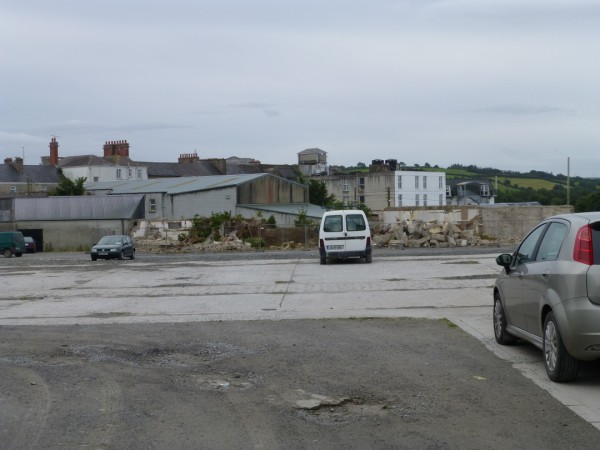 Some of the old sheds at the back of the mart site have been flattened. 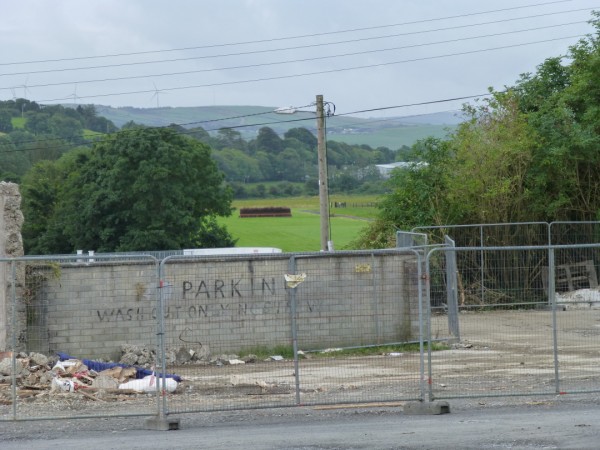 You can now see the racecourse in the background. 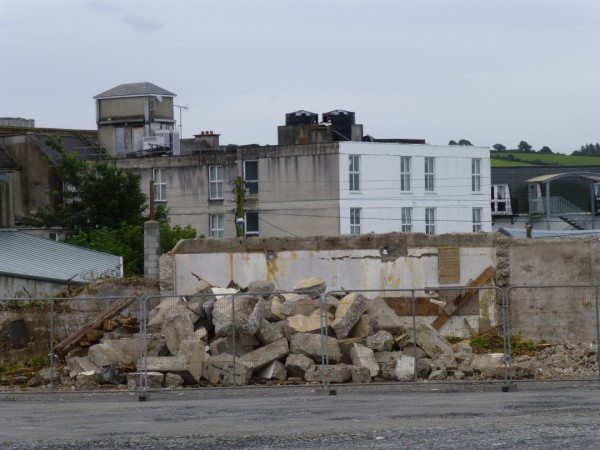 There is a lovely nostalgic ad. for Johnston, Mooney and O'Brien here;

Good luck to all our paraolympians! 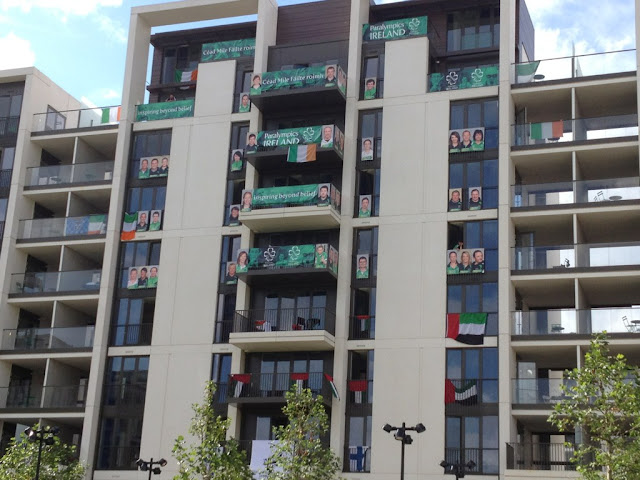 This is the Irish block in the paraolympic village.

Remember the lovely Luzveminda from yesterday. Her Kerry connection was a granduncle called Bill Myers not Jack as I said. He won 4 All Ireland medals. 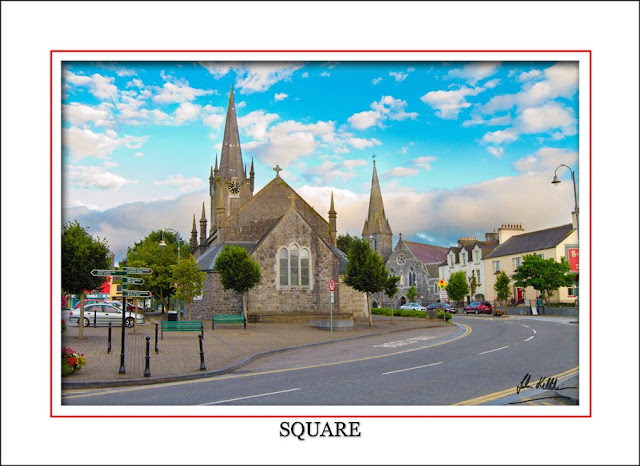 This absolutely beautiful postcard of The Square I found in John Kelliher's website.

On this site you can select any country and see how its people settled across the U.S. Fascinating! 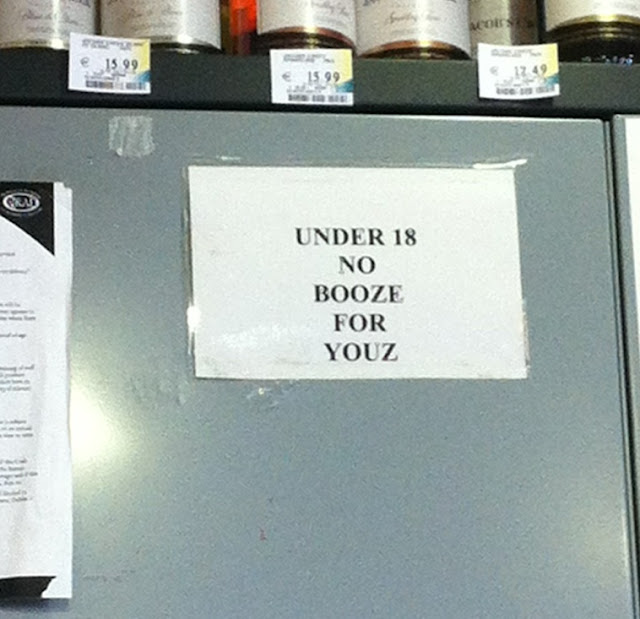 Sign spotted in the Five Lamps area of Dublin. 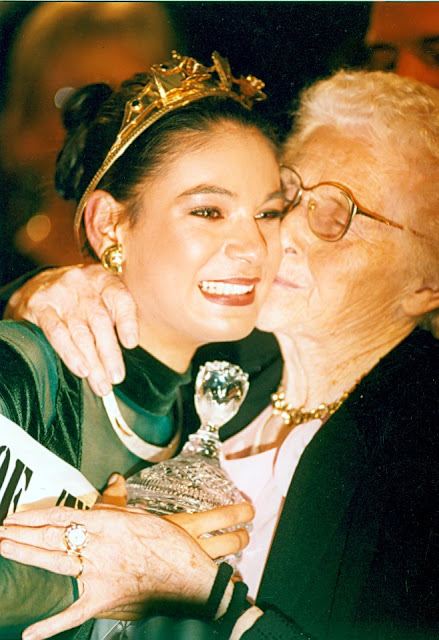 Luzveminda O'Sullivan being congratulated by her Kerry grandmother after she had been crowned Rose of Tralee in 1998. Luzveminda's father, Sean O'Sullivan worked for Bord na Mona in Mayo. Luzveminda's mother Florita came from the Philippines to work in Mayo and met Sean. They fell in love on top of Croagh Patrick and got married in 1976. Her grandmother's brother, Jack Myres, won All Ireland Senior football medals with Kerry in 1937, 1939, 1940 and 1941. 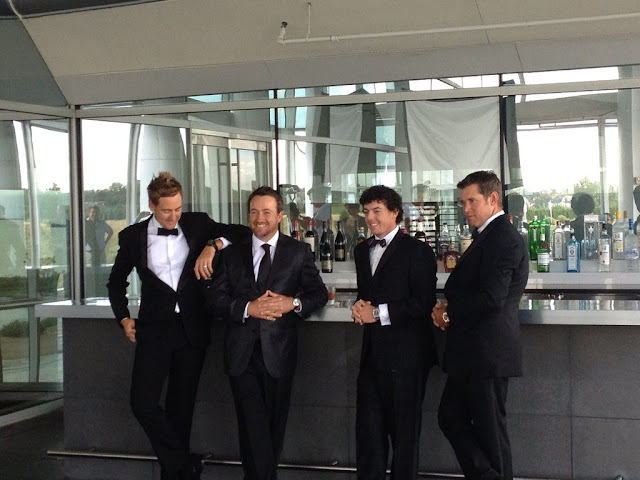 Ryder cup golfers, Poulter, McDowell, McIlroy and Westwood suited and booted for a promotional shot yesterday.
Posted by Listowel Connection at 07:30 No comments: Links to this post

In response to a query about the Boltons after whom the cross was named. Michael Lynch, County Archivist  has done a bit of searching and he has come up with the following;

"In relation to Bolton’s Cross, I had a look at Griffith’s Valuation, and found that for Skehanerin Lower, the Knight of Kerry is listed as being occupier of 4 plots of plantation land (i.e. forested land) in this area, 3 strips of which border the road leading to and from Bolton’s Cross.  The immediate lessor is given as Robert Bolton.

The Tithe Applotment Book (1830) for Listowel parish lists “Mr Bolton’s Demesne” and “Mr Bolton” as holder of the same land, along with another plot listed to 2 other men (Mulvihill and Horan).

As to who these Boltons were, it is not easy to say!  The “Kerry Evening Post” (22 May 1833) gives a marriage of Robert Ellis Bolton, youngest son of John Bolton, Prospect Lodge, Listowel, to Christiana, 3rd daughter of Mr Haycroft, Doneraile.  This couple seems to have moved to Doneraile, as subsequent records show a Robert Ellis Bolton L.A.H.D. (I don’t know what that set of initials stands for!) buried there on 23 April 1890, aged 77 years & 10 months.  Christiana was buried at Doneraile on 9 July 1886 (aged 71).

I tried for a “Prospect Lodge, Listowel” in Valerie Bary’s “Houses of Kerry”, but no joy there either."

Thank you, Michael. That sheds some light on the matter for us. I googled L.A.H.D. and got nowhere. I wonder if any reader has any idea what those letters stand for.

The original request for information on Bolton's Cross came from Jonah McKenna Moss. In a follow up letter he said:

"The Justice family was a large wealthy Anglo-Irish protestant family), with two branches which resided in Kerry, and Mallow area in Cork. All the various family trees agree on the point that the daughter of John Bolton and Mary Justice, Julia Bolton married one of the Mallow Justices (my ancestor), uniting the two families again. The Mallow Justices married into the Allens, Ashetons, Barret, and Holmes families as well. One branch converted to Catholicism and moved to Boston and Melbourne Australia.

Essentially, I am trying to figure out why there is a place in Listowel called Bolton's Crossroads, and which Boltons it was named for, since there is a high likelihood that they might have been connected to mine. "

John Fitzgerald penned this poem about a memorable joust in the old ball alley. He says

"Was delighted to see the piece relating to the artwork generated on the old ball alley. Sad to have seen it neglected for so long especially since it was a great gathering ground for young and old when I was growing up..

The attached is a piece I wrote relating to the one of the many great games we were privileged to see in the 1950's. At that time youngsters had to apprentice on the outside wall of the alley facing towards Bridge Road on a mud floor until they were good enough to mix with the masters in the alley proper.

The foursome mentioned in the poem are Junior Griffin, Tom Enright and Dermot Buckley from the Bridge Road and John Joe Kenny from Patrick Street.
Alas.only Junior survives, and, by all accounts, is still hale and hearty." 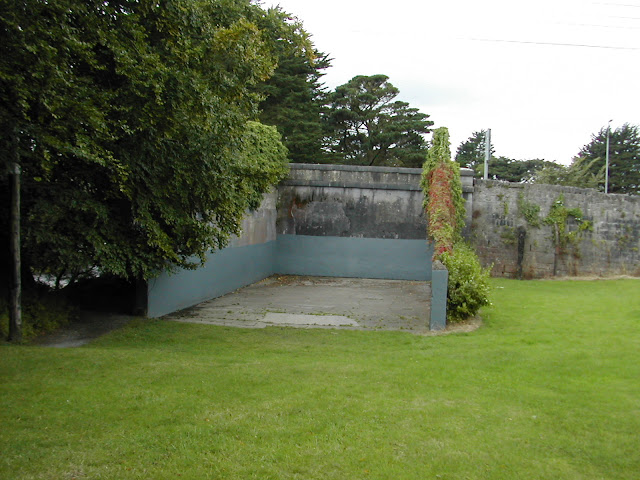 
Standing on the dead line


I face the pockmarked wall,


it hides the bridge above me
fond memories I recall,
the side walls mark the theatre,
the concrete floor the stage,
four players take their places
the finest of their age.
The cocker’s hopped and hardened,
Junior’s feet fix solidly
he contemplates the angle
of the first trajectory.
His swinging arm begins the game
the ball’s hit low and fast,
a signal to John Joe and Tom
this will be no soft match.
Dermot standing by his side
sees his neighbour win first toss,
a simple game to twenty one
no ace is easily lost.
I watch them from the grassy mound
behind the dead ball line
hear the cries of older boys
cheer each one at a time
and in the space of half an hour
the ball has weaved its way
through every nook and cranny
in this battlefield of play,
the long ball to the back line
the close one to the wall
the deadly butted killer
seemed to hit no wall at all
and in end the four of them
take leave just as they came
and beckon us to take our place
and learn more of their game,
the game that gave such pleasure
the game I got to know.
when I was young and full of fun
in the Alley years ago.

I met Junior recently and I asked him who won the handball match. He told me that there were no winners or losers because as soon as you won one game you were challenged to a rematch.
There was usually a little wager on the game. Money was scarce enough so the bet was small but once Junior was on the winning side of a 2/6 (a half crown) bet. He went double or quits until the money was astronomical, and no body had any hope of paying it.
In those days the glory of winning was everything. People did not expect medals or trophies. They were happy just to win.

Posted by Listowel Connection at 07:30 2 comments: Links to this post