"My heart's best treasure is no more" 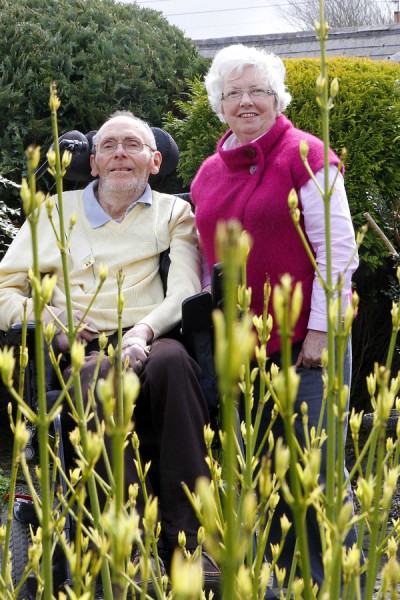 He was my North, my South, my East and West,
My working week and my Sunday rest,
My noon, my midnight, my talk, my song....

My beloved husband, Jim, passed away peacefully on Sunday June 23 2013. I am going to post here the eulogy our daughter, Anne, delivered at the funeral and then I will take a break from blogging for a while.  Jim and I were a team and it's hard to carry on with the best man down.

What can I say to you about my lovely father, Jim Cogan?
He grew up in Cork, the son of an English mother and Cork father, the second youngest of 4.  Jim’s mother was a convert to Catholicism and had all the zeal of a convert.  The family was a religious one.  After school, Jim entered the SMA order.  They had a church near his home in Cork.  For a while, Jim was happy in the order and he made many lifelong friends during his time in Galway, Dromantine and UCC.  But religious life was not for him and he had the courage to leave 6 months before ordination.  Jim had many fond memories of his time with the SMA.  It was always part of who he was.

Jim got his first temporary teaching job in Scoil Mhuire, Kanturk where he met Mary, the love of his life.  That was his first step towards the Kerry border.  In the Summer of ’73, he saw an ad. in the paper for a Science Teacher’s job in St. Michael’s, Listowel – a place he couldn’t even find on the map.   He made his first trip here for his interview with Father Diarmuid O’Suilleabáin.  Those were different times.  The interview took place in the principal’s house.  Interview over, Jim was told he had the job and Father O’Sullivan asked him to stay for tea which he cooked for him himself.  So began Jim’s long association with Listowel.

Father O’Sullivan recognized the counsellor in Jim and he retrained as a Guidance Counsellor.  Subsequent principals & colleagues in St. Michaels did everything they could to make life easier for Jim.  In his time in school, Jim touched many lives.  Only Mary knew the enormous effort it took on cold wet mornings to get himself to work, but with characteristic determination, Jim pushed himself to give his best effort always.  It gave him enormous pleasure to get an email from a past pupil and he loved to hear that a man he had helped had done well and gone on to be happy in life.

Jim was hopeless at remembering names.  When he and Mary were out walking, if she saw someone whose name he should know approaching, she would say ‘Let me take your photograph with… announcing the name loudly and clearly.  All that photograph taking was only a ruse.  Jim became the most photographed person in Listowel.

Jim was at the head of every technology curve.  He was one of the first with a home computer, and an electronic organizer.  He embraced the ebook which changed his life.  He inspired the rest of the family towards technology which is a lasting and fruitful influence on us all.  Mary, who is famous in our family for once turning over a CD to play the other side, is now the unofficial Listowel blogger thanks to Jim.

Jim was always fascinated by new inventions and gadgets and he shared that passion with his late brother, John.  As soon as his disability began to affect his everyday life, John stepped in to invent and adapt simple things to help with everyday tasks.

As his disability increased, so did his determination to find new technologies to help him overcome these disabilities.  Everyone who knew him was familiar with his mastery of hands-free devices.  He was an expert on voice-recognition software and few things gave him more pleasure than the discovery of a new piece of software that enabled him to do something for himself.  A friend of ours tells a story of the day that she and her young son visited our house while Jim was on his computer.  When they got home, Padraig, aged four at the time, sat in front of his computer and issued the commands ‘Wake up’ ‘Mouse Up’ ‘Mouse Down’ and was so disappointed when his mouse wouldn’t obey as Jim’s did.

My father was a ladies man.  Most of Jim’s best friends were women.  Apart from Mary, some other women had a special place in his heart.  What would he have done without Joan, Helen, Breeda & Eileen?  His advancing disabilities brought even more ladies into his life.  Jim had PA’s, home-help, Cathy Corps and the twilight service, and the Community Care team.  These all enabled him to live at home to the end.  His final days were spent in the Bons, Tralee where he was given exceptional care and attention by all the friends he had made over a very long association with that hospital.  It gives us, his family, great consolation that he was able to be at home with Mary for so long and his last days were in familiar surroundings among friends.

Faced with battle after battle in his 65 years of life, Jim Cogan’s quiet courage and resillience is an inspiration to us all.  Coming to Listowel, and particularly Cherrytree Dr. was to be one of the better moves of his life. But by far the best move he ever made was in marrying Mary Ahern from Kanturk.  He drew love and strength from their relationship, and she was his very own Listowel Connection for over 40 years. I know that he would want me to thank her for absolutely everything.

In Listowel, he found himself among a supportive community of neighbours, friends and colleagues. Throughout his life Jim had a wonderful capacity for making and keeping friends. He was a wonderful father and grandfather.  He was very proud of us and we are very proud of him. Thank you.

Among the many messages of condolence was this lovely one from Jim's old friend, Bernard Lynch

"I am so sorry to hear the sad news of Jim's passing. If Jim is not with God, then there is no God. Ever since I first met him in 1965 I found him to be one of the most transparently credible human beings I have ever known.

In Jim's eyes the difference of social position, of intellect, of culture, which different people exhibit, and on which they so fantastically pin their pride, was so small as practically to vanish. For him, as I knew him, all that remained was the common fact that here we are, each of us pent into peculiar difficulties, with which we must struggle by using whatever fortitude and goodness we can summon up. He was more lovingly aware than most of the depths of worth that lay hidden in each person's life.

Rich memories, nothing but memories
But in the grave all, all, shall be renewed
The certainty that I shall see that man
Leaning or standing or walking
As in the first loveliness of his youth
And with the burning fervour of his youthful eyes
Has left me muttering like a fool...."