John Duggan and some Ballygologue youngsters in 1975

In every family there is at least one who realises the value of the family tree and he takes it on himself to  write the story in order to preserve it for the next generation.
When people contact me looking for help with their tree, I usually refer them to NKRO but when John Duggan wrote I knew I could help him myself, since I knew just the relative he was looking for.
I demanded payment for my services, in the form of a story for this blog.

It’s probably appropriate, with Listowel Writers Week looming large on the local calendar, that I begin my story with US comedy series “Guys Book Club”. The programme follows the misadventures of six disenchanted married men who try to recapture their manhood by using a fictional book club to escape the clutches of their nagging wives. It’s something that probably wouldn’t have crossed my radar but for my ongoing research into our family tree which, as of last weekend, now includes Chicago-born series writer and producer George Zwierszynski, a great-grandson of Ballybunion. He became the latest in a lengthening line of discoveries during painstaking hours, weeks and months of trawling through archives, both online and in person.

What began over Christmas as a flippant comment about how interesting it might be to know a bit more about our ancestors has now become what, to the casual observer, might appear to be something more akin to an all-consuming obsession. And it was this newfound devotion that led me back to Kerry over the past Easter weekend – a location that had been a second home throughout my childhood years due to our annual Summer holidays spent at the beach in Ballybunion, but a county that had eluded me for over twenty years, with the exception of one wedding, possibly due to my greater independence and spending power that prompted the exploration of other worldly locales.

Conveniently, the majority of my mother’s family history was centred between Ballylongford and Ballybunion so they were the main focus of my attention as I embarked on my journey to the past. Cognoscent of it being one of the two busiest times of the year for the church I had contacted Fr. Kennelly in Ballylongford in advance of my visit to assess the possibility of inspecting the parish records during the Easter weekend. Fortunately, he welcomed my intrusion with more generosity than I could ever have hoped for. He graciously granted me as much time as I wished with the craggy, hard-covered ledgers that held the elusive information I needed to solve my genealogical puzzle, and at one stage he even gave me an impromptu linguistic lesson so that I could decipher the Latin names in the older pre-Vatican Two records. The thick heavy pages of the book and their elegant calligraphy transported me back in time to another world as I scanned the pages for Bunyans and Wallaces. The circle of life would in some cases be completed before my eyes as a name that would initially appear in the baptism book might later be found on the marriage register and then soon afterwards in the death records – a sobering experience.

With my mother in tow I also visited numerous relatives and acquaintances in the area who were mostly intrigued, but sometimes bemused, by my endeavours. All were unfailingly helpful though, with boxes of photographs being thrust onto tables in front of me and permission being given to record as many of them as I wanted. Inevitably once the albums were opened the trips down Memory Lane ensued and the stories started to flow, time passing in decades before our eyes and in hours on our watches. It was great to meet in person the people who constituted such a significant portion of the family tree and it gave the project a life and a personality that had been somewhat lacking in what had been largely an academic exercise up to that point. I presented my findings that included records of immigrations to America and also evidence of how long-accepted “distant” relationships had come into being, something that always drew expressions of wonderment. The information exchange flowed both ways though and in the course of discussions I unearthed a couple of genuine nuggets of information that would never have registered with me if I had been merely scanning through a record book somewhere, such was its obscure nature.

We also dedicated nearly a full day to the more sombre duty of visiting the local graveyards where our ancestors lay, from Aghavallen and Lislaughtin to Kilconly and Killahenny. This was not an activity that I had much appreciation for during my formative years but after the previous months of investigations I now had a greater understanding of the people we were paying our respects to. After four full days of being a general nuisance to the people of the locality it was time to leave the Kingdom and return home for work the following Tuesday morning. I left the area satisfied with all of the information that I had gathered but more importantly aware that the family tree was a living thing and not a very large piece of paper with a lot of lines and pictures in it.

After updating my records upon my return home I noticed that there was still one branch of the tree that had bore very few leaves. Repeated enquiries about the Carmodys of Listowel had yielded very little except for the odd puzzled look or the uncertain proffering of a few names hastily followed by a dismissive “sure they’re all gone now”. Perhaps spoiled by the great success that I had enjoyed with all of the other families I refused to believe that the Carmodys could not be found. I bombarded Google with every combination of keywords I could think of. I interrogated the genealogy websites relentlessly. I harangued my mother in the forlorn hope that some long forgotten recollection would miraculously return to her, but it was all in vain. So, in desperation, during my latest assault on Google I happened upon a blog that branded itself as being for the sons and daughters of Listowel who found themselves far from home. I browsed its pages and saw photographs from the archives along with other content that harked back to a bygone era. I decided that this might be my last hope at tracking down the elusive Carmodys and immediately set about typing an email to the address given on the website. Amazingly, within four hours I received a reply from Mary Cogan acknowledging my correspondence and promising to investigate the matter further later in the week. A couple of days later Mary sent another mail concerning a photograph of Carmodys Bakery that had featured in a recently published local book. Finally, a breakthrough! I was heartened by this development and eagerly awaited the next correspondence. That Saturday my search was over.

Despite the presence of a TG4 camera crew for a couple of days during the week and all its associated upheavals Mary never forgot about my enquiry and I was overjoyed when I read the contents of the email. It triumphantly proclaimed that the prodigal Carmodys had been found and, what’s more, they were living in Listowel! She also provided me  with contact information for them and within a couple of hours I was chatting on the phone to a real live Carmody, swapping stories and filling in the blanks that had blighted my tree for so long. I had barely hung up the phone when my mother was asking me all manner of questions about the family and she too was delighted to hear all about them. It brought to a close a long search and at least future generations won’t have to wonder what became of the Carmody clan. Ironically, it’s fair to say that while we share some ancestors we also differ in some things, because it transpires that she is heavily involved in the upcoming Writers Week but the extent of my literary prowess would barely qualify me for a role as an extra on the aforementioned “Guys Book Club” show. 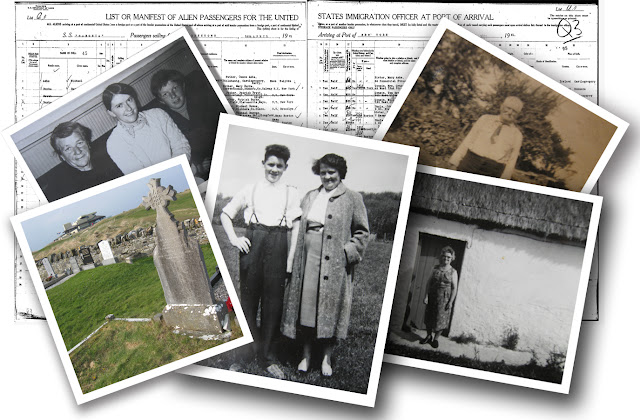 Thank you, John. What a great story and what a lovely collage.

BTW his Carmodys are the Carmodys of Wonder Bakery fame.
I think you will agree that John is not too bad at the writing. We might see him yet at Writers Week. 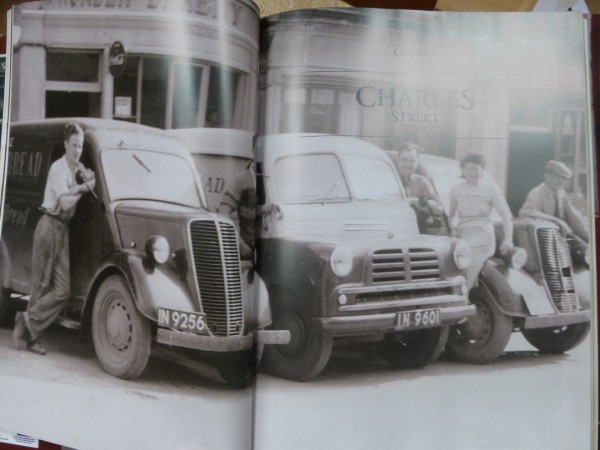 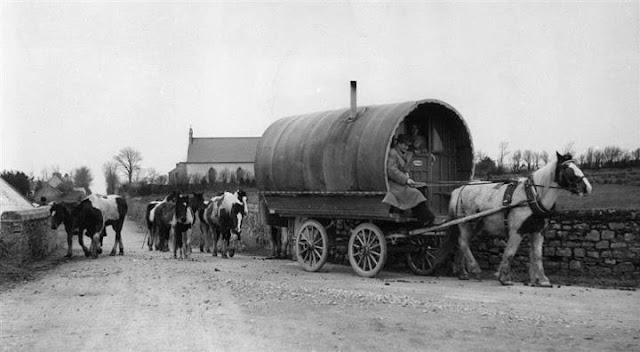 This photo was captioned Kerry Travellers 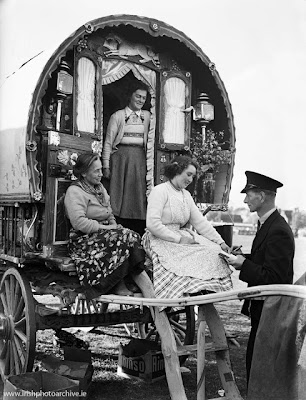 This yesterday's picture. Apologies to all Gardaí. The man interviewing the Travellers is not a Garda 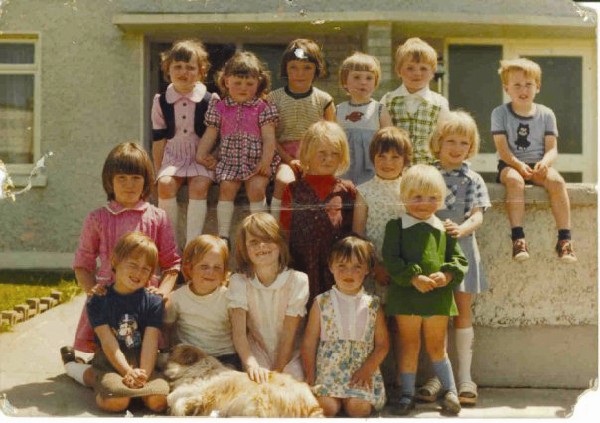 This photo of Ballygologue children in 1975 was first published in The Advertiser. If you recognise yourself, do write and tell me where you are now.

Congregational singing in the church in Knockanure recently