Liam Healy , Knocknagoshel and some local people I met 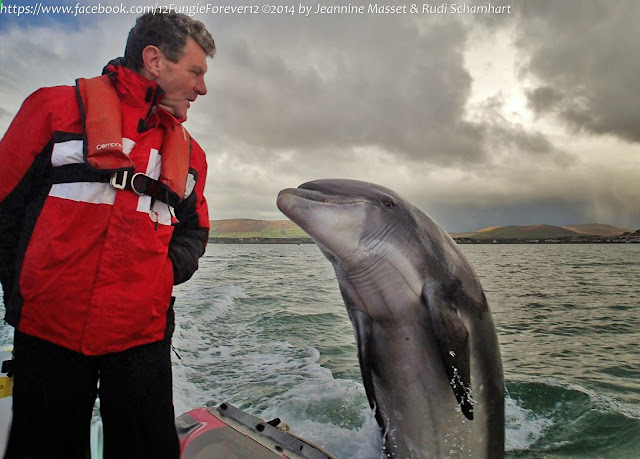 Another great Fungi and friend photo from Fungie Forever 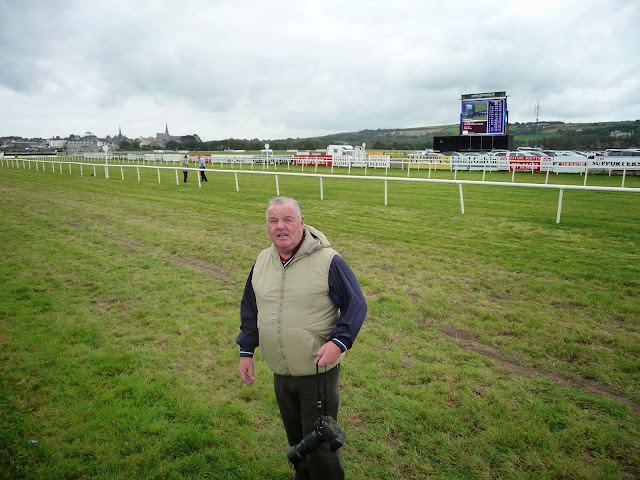 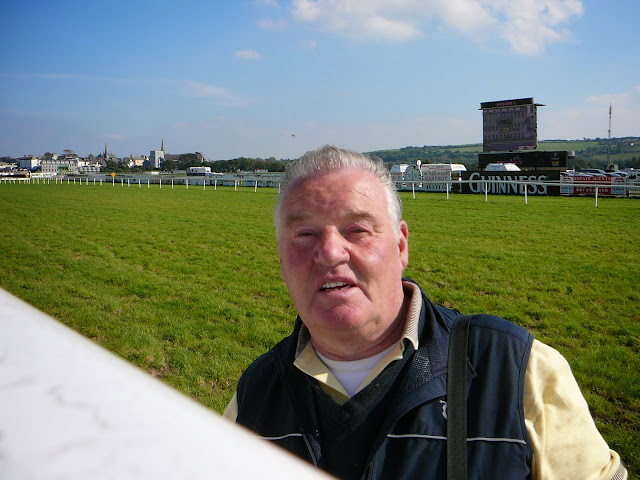 I took these photos of Liam Healy on Listowel Racecourse, a place where he is truly at home. For years I watched from my perch beside Jim on the wheelchair stand as Liam went about his work. Liam always had a kind word and a bit of banter.  He never had a tip though! 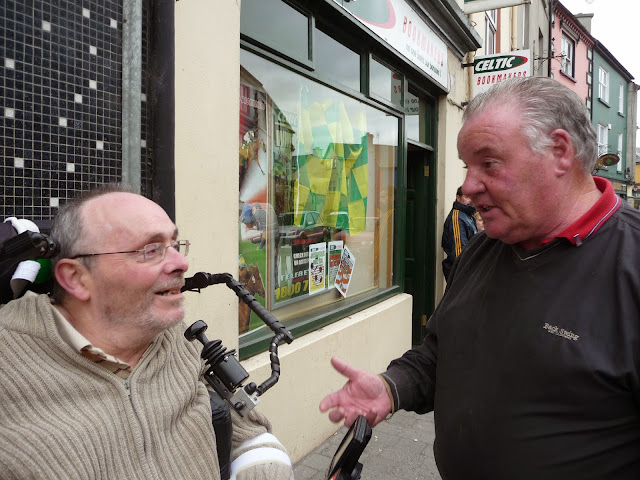 I took this photo of a chance meeting on the street in October 2009. Jim loved to run into Liam when we were out and about. He was always good for a chat.

Now back to my story of Liam's early life and his awakening interest in photographing horses and horse racing.


Liam is a self confessed hoarder. As a young boy, as well as the photos he got from the newspapers Roddy O'Sullivan in Moriarty's Betting Shop gave him, he used to go to the “quarry hole” in search of old papers so as to cut horse pictures from them. The quarry hole was the local name for the town dump, now The Garden of Europe. Paddy Kennelly, Paul Kennelly and Paddy Hartnett were the men on the dump horse and cart in those days. When they saw him rummaging around in the refuse, they volunteered to keep him any newspapers they came across.

Cutting out photos of horses, sorting them and keeping them became Liam’s hobby. All very innocent but we must remember that Liam lived in a 2 bedroomed house with no spare storage for his hoard of papers.  Again his Convent Street neighbours came to the rescue. Bridge Joy, a neighbour and a widow gave Liam the use of her shed to store his stash. He was now spending precious hours in there cutting and sorting his pictures. His father became concerned that he was doing this when he should be studying. Liam had loads of ability for schoolwork but he loved the horse pictures more than lessons.

His father took the drastic step of confiscating and burning all of Liam’s treasured cuttings. Such is the mature Liam’s generosity of spirit, that he holds no grudge against his father for this act . His father was trying to rear his family as best he could in difficult circumstances. He believed, as many parents do, that education holds the key to unlock a better life for his children and he did what parents did in those days. He got rid of the distraction. Liam understands fully.

Liam has happy memories of school. His favourite teacher was Frank Sheehy who he can quote and mimic with the accuracy of a sharp memory.  Mr. Sheehy’s nickname was The Bulldog. He remembers “Tháinig long ó Valparaiso….” The first poem he learned in Frank Sheehy’s class. He remembers the ash plant which was used more as a threat than a punishment. Bryan MacMahon, who Liam describes as “a great encourager” also taught Liam and he remembers marveling at the mathematical abilities of one of his classmates, Patsy Browne who still lives in Ballygologue Park.

Liam’s father, Paddy Healy worked for Kantoher/Castlemahon Creameries. He went around the country buying eggs for them. After that he had his own business selling goods. Paddy was a good father and he tried to instill good manners and a good attitude to work in all his children. Liam remembers that he always put his left shoe on first. When Liam asked why he replied that life is a dance and a man always leads with his left foot.

Paddy remarried, Babe Lynch from Cnoc an Óir. They had  3 daughters, Geraldine, Elizabeth and Catherine and they became one happy family. His father bought Number 9 and extended their house. Babe’s sisters because aunties to the Healy children and the two families blended happily.

As his family were growing up and could help with the business, Paddy took on an agency for newspapers. Liam remembers going to the station to meet the 6 o’clock train. Then he ran down William Street and all through the town to the Bridge Road delivering the papers as he went. The newspaper then cost one anda half or two pence. People in town usually ran up a tab and paid at the end of the week. When he had delivered to the Bridge Road, Liam came back and collected another bundle and sold these door to door in O’Connell’s Avenue.


Liam liked this run better because the people paid for the paper as they got it and so they came out to chat.  ( Even back then Liam loved to chat).

His father had another string to his enterprise bow.  He bought fish from Finbar MacAulliffe and sold them on Thursdays and Fridays. Before Vatican 2 changed the rule that forbad the eating of meat on Fridays, everyone ate fish so there was an opening for someone to bring fish to the outlying areas. People did not come to town everyday but they did come to the creamery. So, on Thursdays and Fridays Liam used to stand at Lisselton creamery and sell fish to the farmers. He also sold fish in Ballylongford and on fair days in Athea. All of this enterprise meant that Liam was frequently absent from school. Despite this, Bryan MacMahon felt that he was good enough for St. Michael’s and encouraged his dad to send him there. Liam’s brother Pat was already in secondary school. There was a fee of £12 per annum in those days plus books and other school related expenses. Liam says that his dad just couldn’t afford it. Liam stayed on in national school as one of the last 2 boys in 7th class in the old boys national school. 7th class was for those who were not going on to secondary school but were too young to leave school altogether. 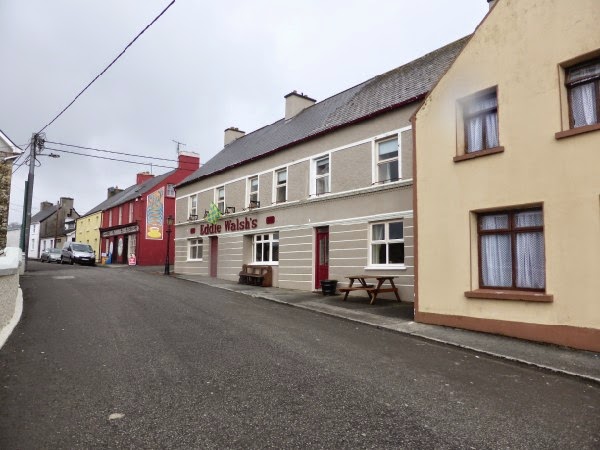 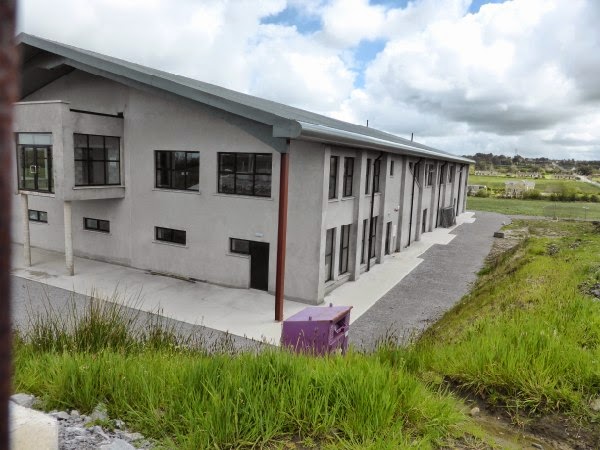 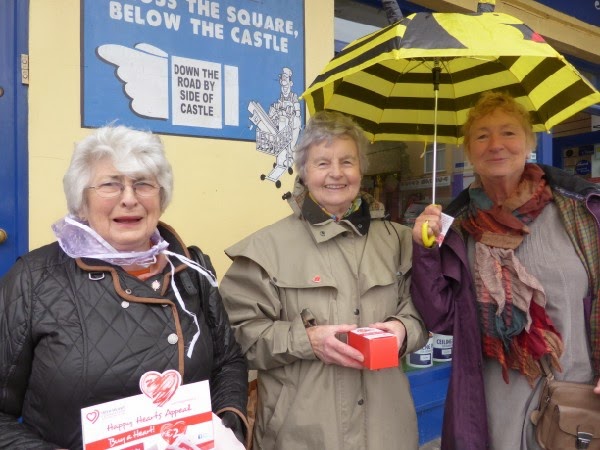 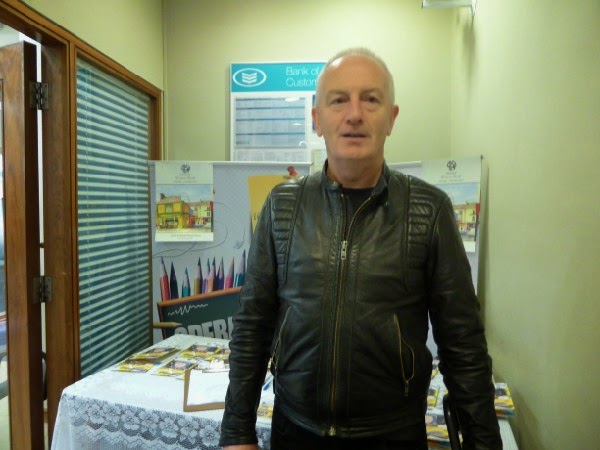 Joe Murphy was doing his banking as I was hanging out with my camera.

Are you a cyclist who loves a card game? 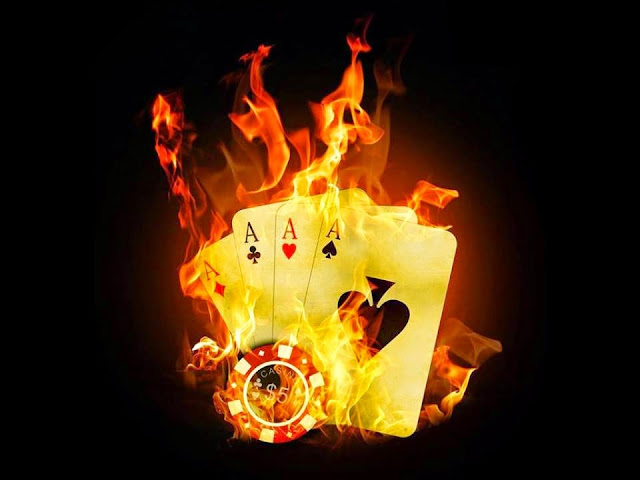 If you answered yes to the above question here is Saturday next, May 23 2015 sorted for you.

"A great fun event - cycling 65KM purely at leisure through the rolling North Kerry countryside - collecting playing cards from 5 locations - returning to McCarthys Bar in Finuge for BBQ, refreshments and good banter and more importantly handing in those cards - the one with the best poker hand wins. A day of fun to raise money for MS Ireland and great preparation for the Ring of Kerry, The RoNK (Ring of North Kerry) - perfect for beginners/ leisure cyclists."

Make your way to McCarthy's Bar, Finuge at 3.00p.m. and away you go.
Posted by Listowel Connection at 07:30