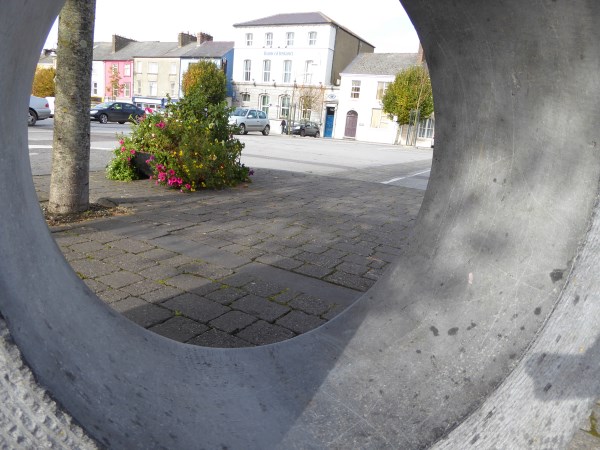 Norella prepares for the Pannisieres celebration 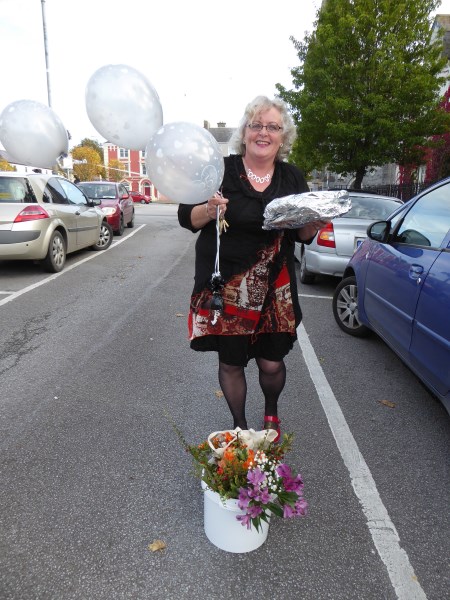 On Sunday Sept 24 I was strolling through the Square when I ran into Norella, weighed down with flowers, balloons and baked goods. She was on her way to The Seanchaí to decorate the dining room for the party to take place later in the evening. Listowel has been twinned with Pannisiers for 25 years and the families who travel to France and who host the French families when they come to Listowel were getting together for a little celebration. 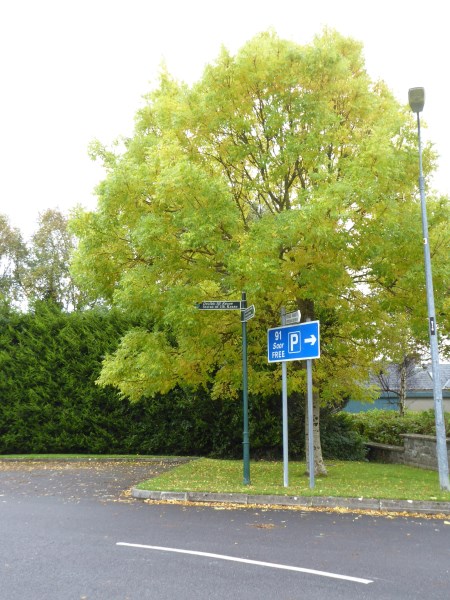 Is this the last summer
Never again to hold
The expectant morning between my hands
Sure, as in childhood, of the strength of noon?

The soft mist, deluded, hangs in the valley,
Promising meadow-sweet, blackbirds and sun,
And the fields lie waste. We are children no longer
And summer is done.

Mary Gore R.I.P.....her contribution to her hometown should never be forgotten This is a photo of Mary(seated) with a group of her old school pals who gathered in The Listowel Arms for a reunion in 2015. It was the first of these reunions that they had to organise without Mary's help.

I was ill when my friend, Mary Gore, died and I didn't get to attend her funeral. Here I am publishing her family's tribute to her which was read at her funeral mass.


Mary was one of the first people I got to know in Listowel. She was a human dynamo. She seemed to be stuck in everything and running many things. She had an enviable ability to keep many plates spinning at once.

Above all though, she was devoted to her family. She counted it a privilege to live so near to her parents and siblings. In time she became the family historian and she liked nothing better than to trace Curran or Kelly relatives and keep them all in touch. She is a huge loss and had left a massive legacy to her family and to Listowel.


Below is the eulogy;


Mary Gore (née Kelly) 10th March 1947 - 2nd June 2016
On the 4th June, Girl Guides and leaders, past and present, stood to attention for Mary Gore. It was fitting that she receive a final salute from some of those who she taught and worked with for nearly twenty years. Accompanying her from church to cemetery, singing 'Day is done', the song that closes a Guide's day, this was their thank you for her service.
Mary was surrounded in her final days - family, friends, colleagues, former Guides - they were her nurses, her doctors, her visitors, they helped her family  .... all giving back to a woman who quietly gave so much to so many people.
Having attended the Presentation Convent she moved to Enfield, North London where she qualified as a nurse at Chase Farm Hospital.  Here she met a widower with a small daughter, who became her husband. They soon returned to Charles Street, Listowel and expanded their family to four.
Mary continued to nurse in St Catherine's Hospital Tralee, in private homes, as a nurse with the medical referee and at the Presentation Convent. Friday nights, she and volunteer friends could be found leading a group of the Listowel Girl Guides, as well as bravely taking them on a week-long annual summer camp. Many people in Listowel can make a great fire out of nothing, thanks to Mary Gore! She discreetly helped new couples during her time with C.M.A.C (now known as Accord), was involved in Tops of the Town shows, the Lartigue theatre and was passionately interested in gardening and genealogy, with a remarkable ability to remember stories from the past. It was poignant that Mary passed away during Writers' Week, having been one of the festival's secretaries in its infancy. Many locals will also remember her from her many years in Jackie McGillicuddy's shop.
Mary was diagnosed with Parkinson's Disease in her early forties.  Not long after this she was diagnosed with cancer, which she went on to beat.  In her typical style, she set up, and was secretary to, the North Kerry Parkinson's Association and was involved in fund-raising events for as long as her health allowed. She, Cliff and her medical team defied the odds for many years, finding solutions to allow her her independence and to allow him to care for her as much as possible.
Mary was happiest surrounded by family - her romance which started in London, continued to her last days, her devoted husband Cliff, always by her side. She lived next door to her beloved parents, Agnes and Denis Kelly, near her siblings Michael and Una and her nieces and nephew and revelled in their visits and those of her children and grandchildren.
She loved to meet with friends, dressing up and painting her nails for the occasion, refusing to be limited by her illness. Her ability to make and maintain friendships throughout her life was evident from the numbers who turned out to say goodbye. She had an innocent sense of fun, a quiet, determined manner and was a lady to the end of her days.
She is survived by her husband Cliff, her sister Una, her children Michelle, Helen, Denise and Aidan, her grandchildren Leigh, Ciara, Isabelle, Maya, Elliot and Noah, all of whom will miss her dearly.