Tom Doodle and other Listowel Characters and U. S. Success or John Daniel Guiney 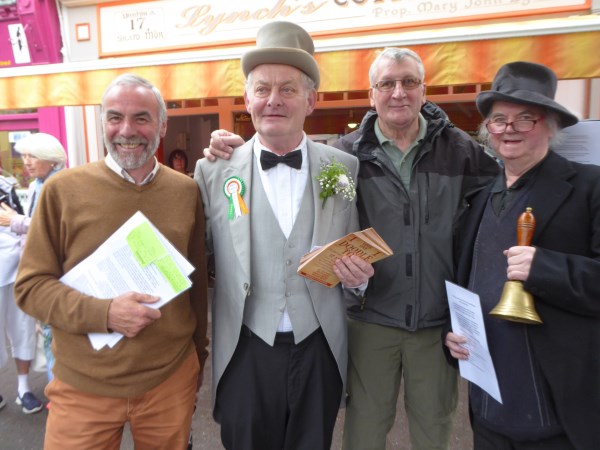 These four men were our entertainers on Vincent Carmody's morning walk on June 1 2017 as part of Listowel Writers' Week 2017. They are John Looney, Seán Moriarty, Vincent Carmody and Sonny Egan. 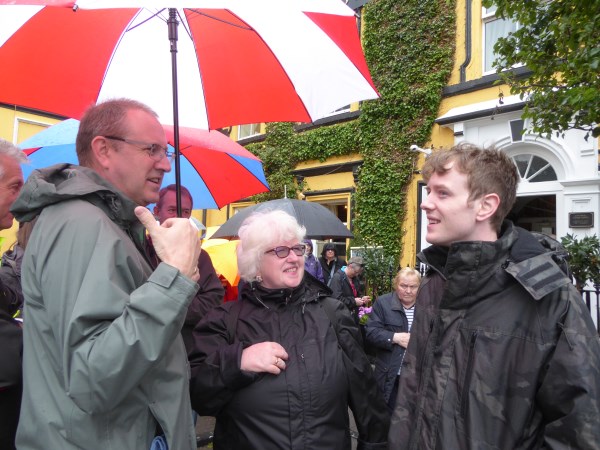 Our starting point as usual was the hotel. Here our young soundman, John, met up with some English visitors, the Hewitts with a different Hannon connection. These people have fallen in love with Listowel and are now frequent visitors. 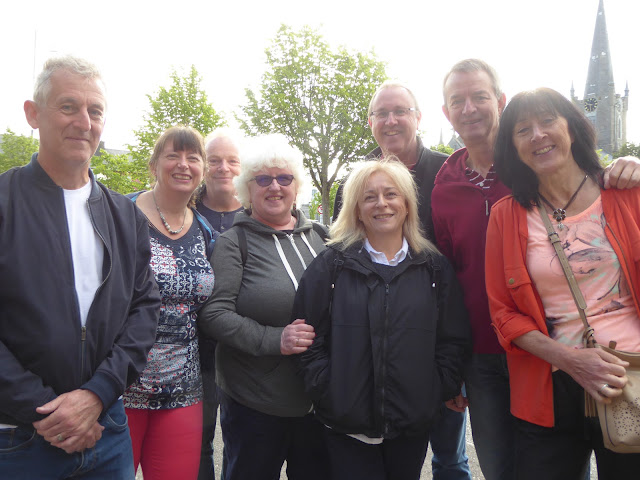 Mark Hewitt is a member of a rock band and he  brought the band with him on this visit. One of their number has just written a book whose title I love. It's called; 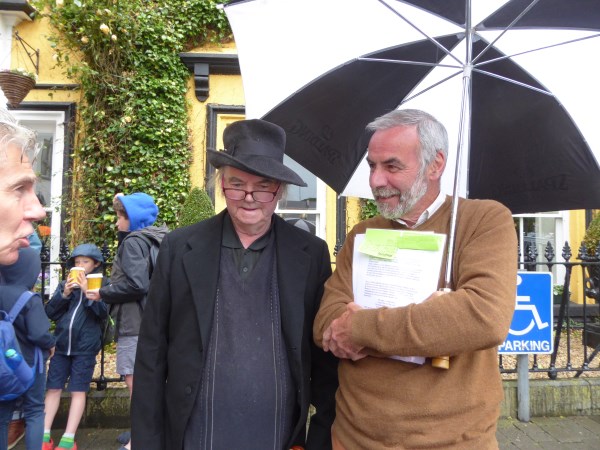 Sonny came in character as the bellman or town crier. 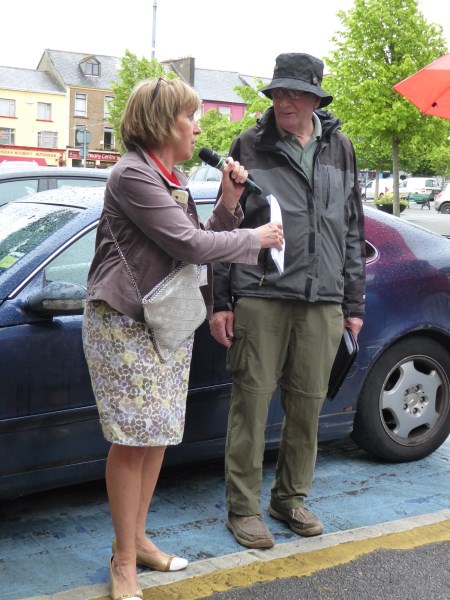 Rose Wall greeted us and saw us on our way. 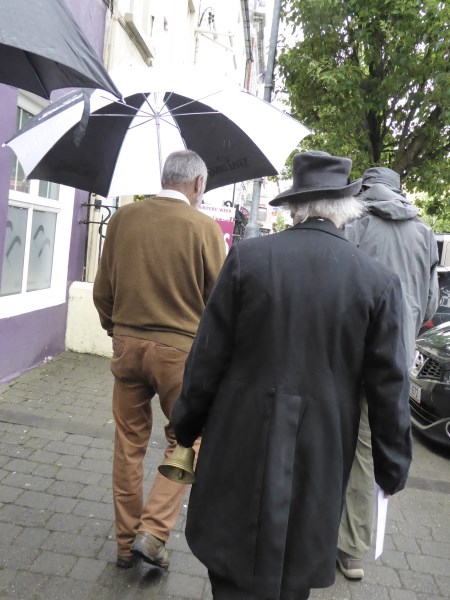 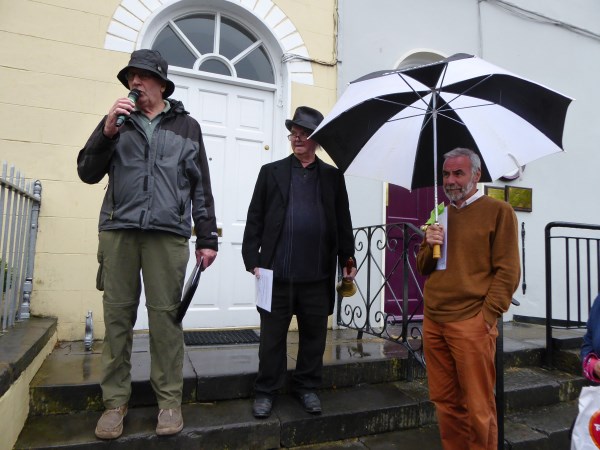 First stop was the home of the O'Rahilly family ...arguably the brainiest family in Ireland at one time. 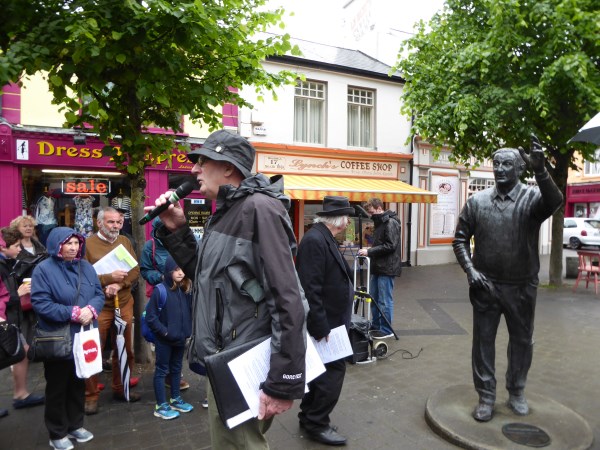 Then on to The Small Square and tales of Tom Sommers and other local characters. 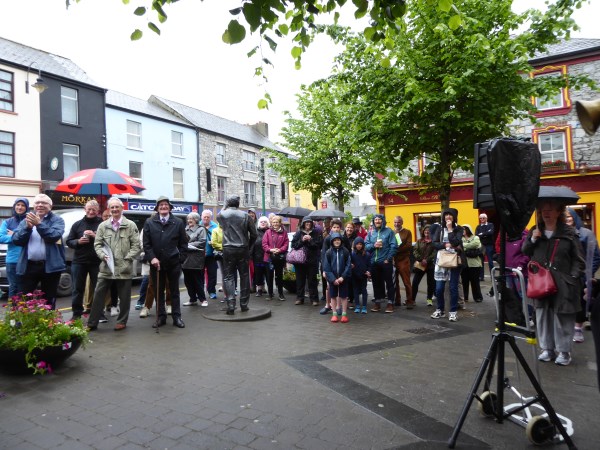 Vincent had an appreciative audience despite the cold and intermittent rain. 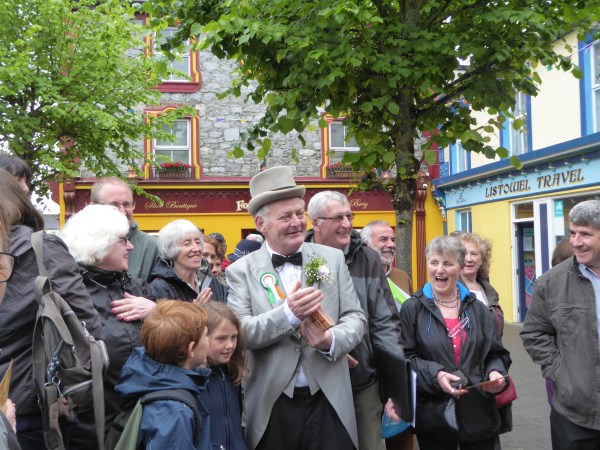 Then out from the Freezer's pub came none other than Tom Doodle. Click HERE to hear the story from Vincent Carmody. 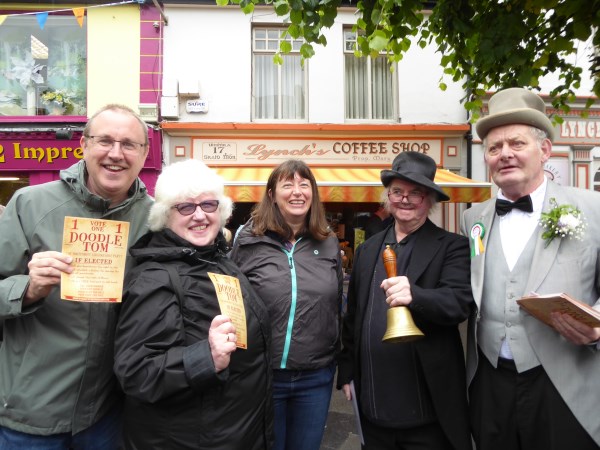 Doodle distributed his election literature and canvassed for votes promising among other unlikely actions to  give leprechauns the vote and to give free treatment for sore heads.

Use your noodle
Vote for Doodle
Doodle on the ball
Next stop the dáil. 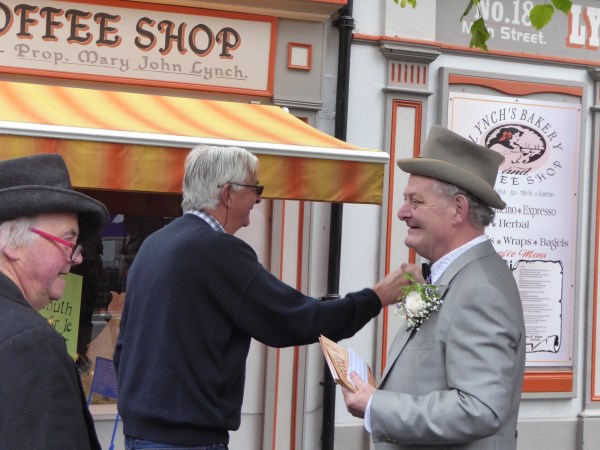 Doodle ran into an old friend, Paddy Fitzgibbon, and posed for a photo with him. 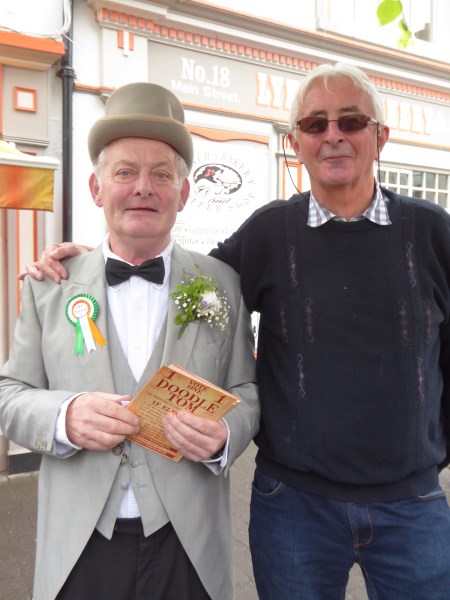 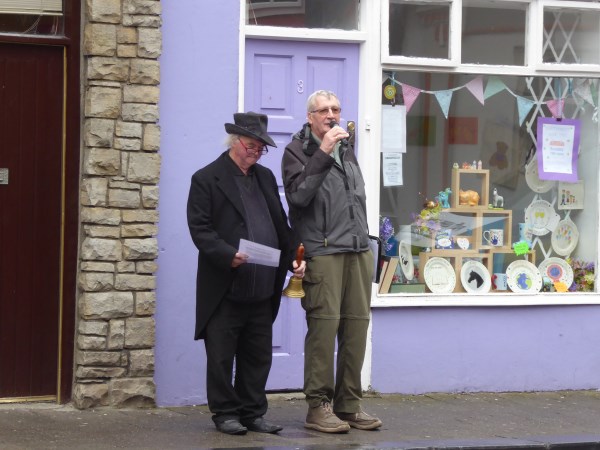 Then on to William Street and tales of D.C. Hennessey and another cry from the bellman. 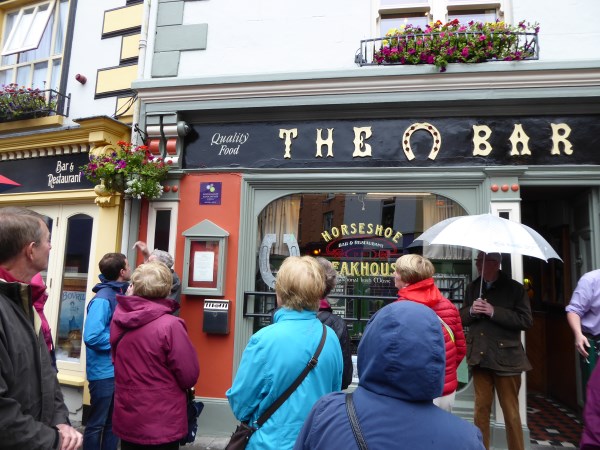 We admired the Horseshoe Bar and Vincent pointed out the plasterwork of Pat MacAulliffe and the detail on the wall for which he had used bicycle bells as moulds. 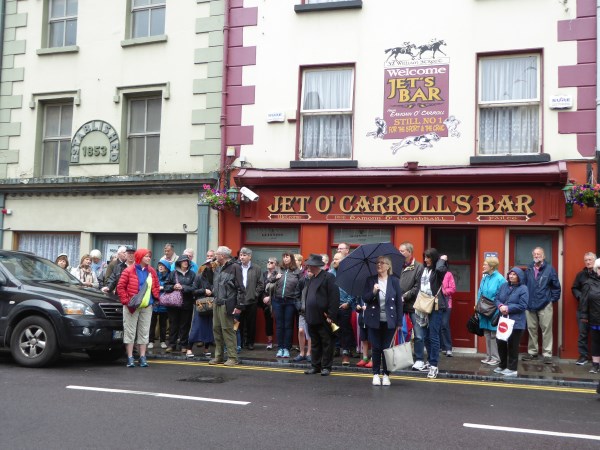 At Galvin's Vincent pointed out the beautiful mosaic name  over the door. 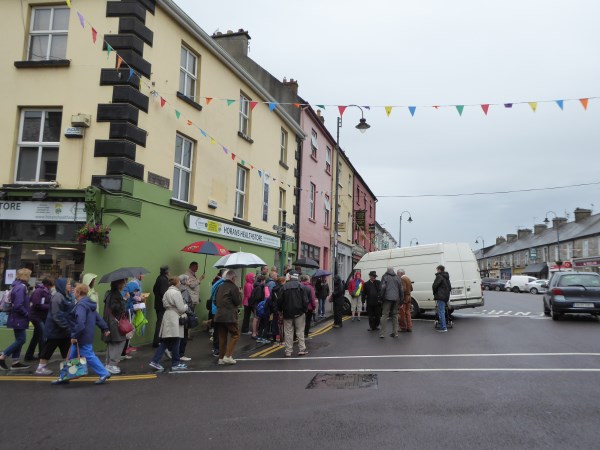 We mosied on to Market Street and on to the home of Cathy Buckley in Upper William Street. 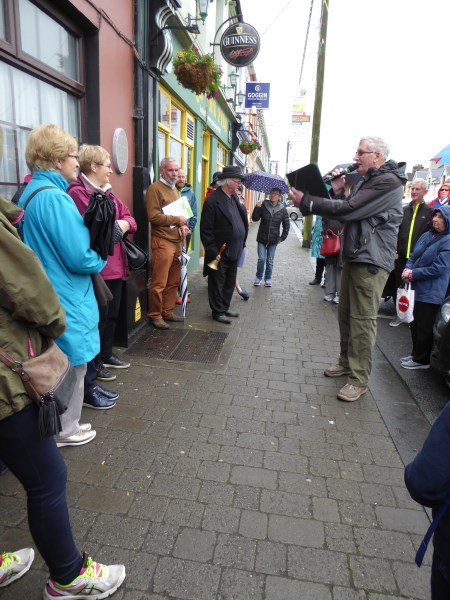 We had another rhyme from the bellman  and the sad story  of Bob Cuthbertson. 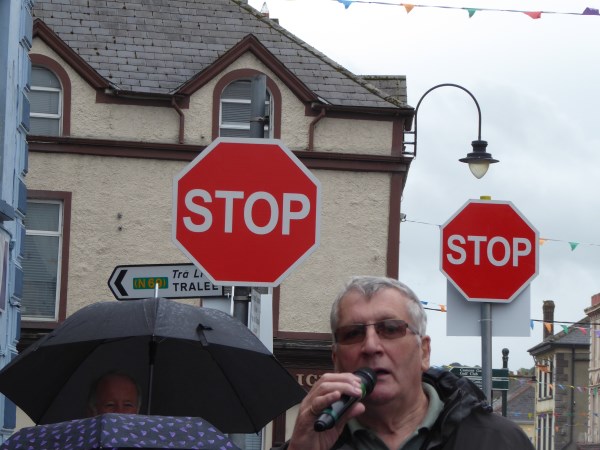 We paused at the corner of William Street and Charles Street and Vincent pointed out to us a strange Listowel phenomenon. The Irish version of the street names is not a translation of the English names. The English street names were given by Lord Listowel who called the streets after his sons, William and Charles. in 1966 a wave of nationalism swept through Listowel and a plebiscite was held to change the street names to the names of the signatories of the Proclamation of 1916.
Changing the name of a street has all sorts of implications, particularly for businesses who have to change their business address. The outcome was a hung vote so what was decided in the end was that each street would have 2 names, one in Irish and one in English and they are totally unrelated to one another. So, for instance, Charles Street is, in Irish, Connolly Street/ Sráid Uí Chonghaile. 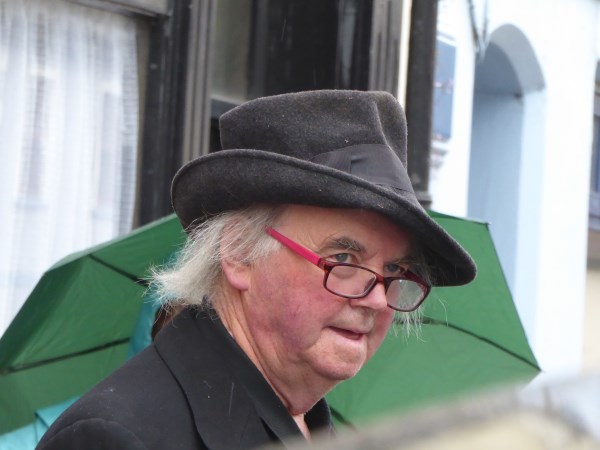 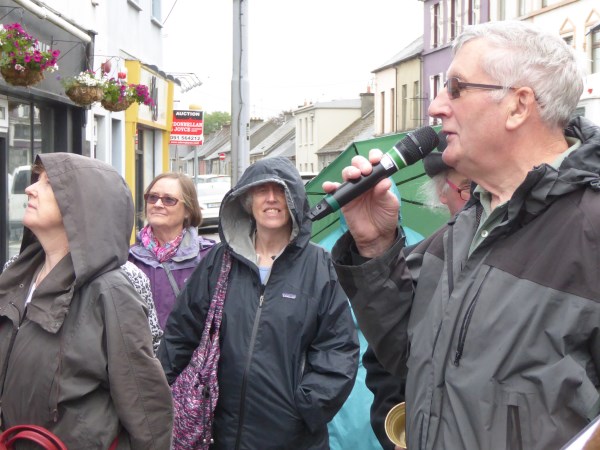 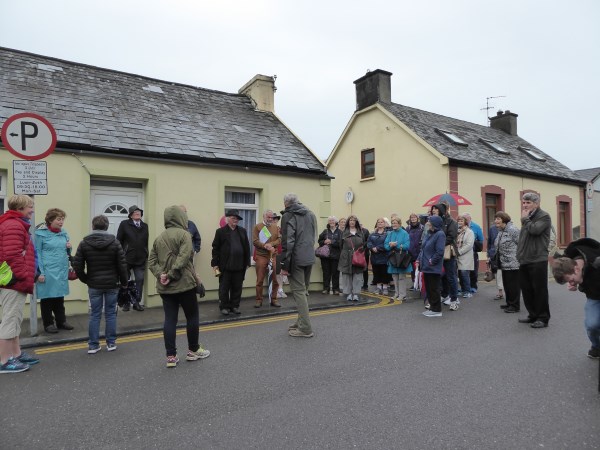 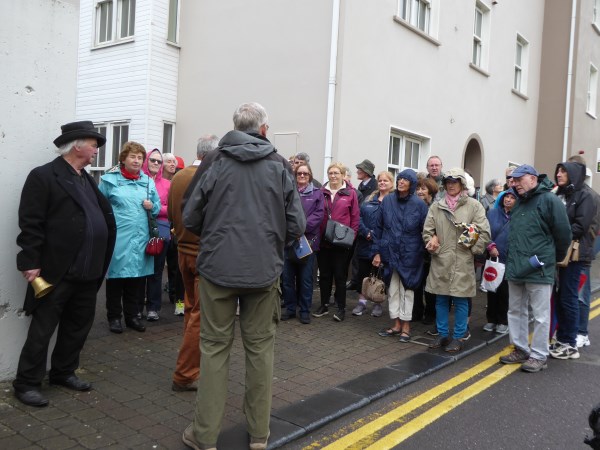 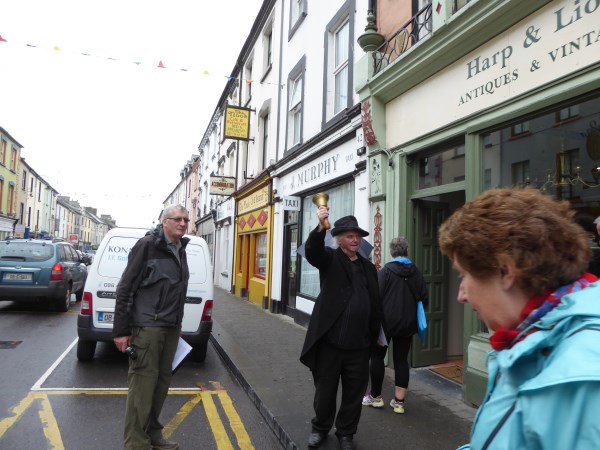 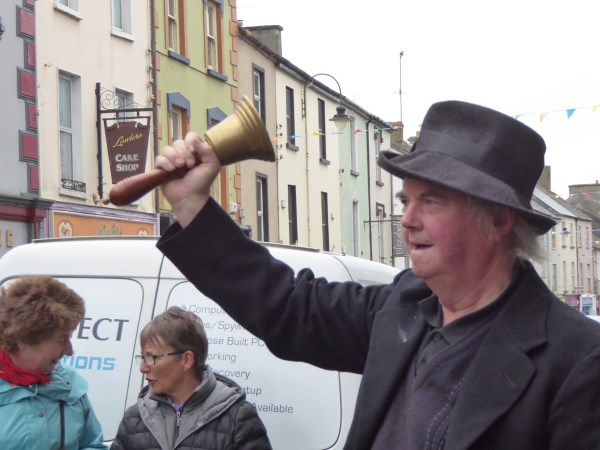 The bellman stopped us again and Vincent pointed out the detail in the plasterwork of The Emporium, one of the finest examples of the work of Pat MacAulliffe. 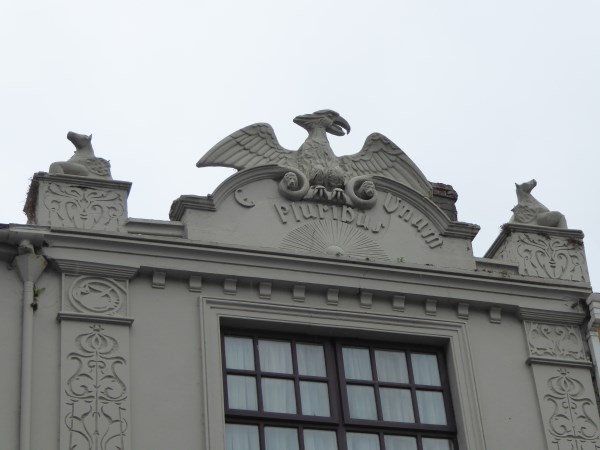 Success in the U.S. for Listowel Golfer

(Photo and text from Newsday on the internet) 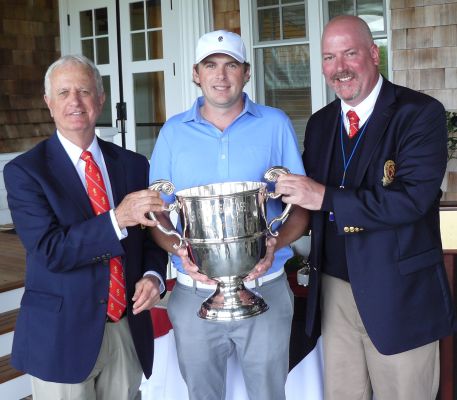 Westhampton Country Club’s waterfront winds, slick greens, tall fescue and Old World bunkers presented a different, disorienting challenge to just about all of Long Island’s top golfers. To John Daniel Guiney, those elements represented something else entirely. He is from Ballybunion, Ireland and he felt right at home.
Big time. Coming up that 18th hole, it’s like you’re in Britain or something, like you’re playing on a links golf course. It’s just a great setting,” Guiney, a first-year PGA apprentice at Piping Rock Club, said after he won the Long Island Open at 4 under par with a final round of two-under 68. He beat Poxabogue teaching pro Rob Corcoran (67) by two shots in the 54-hole championship while no one else beat par.
It took patience and resourcefulness — hallmark demands of links golf — to take the $9,000 first prize on the vintage Seth Raynor layout. The check and the whole week made the 32-year-old winner even happier that he entered the tournament at the last minute and that he moved to Long Island a few months ago.
Guiney played college golf at Rollins, then remained in Florida to play minitours. He became friends with peers such as Keegan Bradley and Jim Renner, caddied for the latter on the PGA Tour, then pursued his own pro golf career in Europe for four years
“I ended up quitting tournament golf for the last year and a half. I kind of ran out of money,” he said. “That happens. I was like what am I going to do? I have an economics background but I don’t want to do that. I want to stay in golf.”
What he did was place a call to an old friend from Ballybunion, Piping Rock head pro Sean Quinlivan, who offered him the apprentice spot. Guiney (pronounced GUY-knee) does a lot of caddying and works in the pro shop two days a week, he said, “Just learning the ropes.” At Quinlivan’s suggestion, he signed up for a Long Island Open qualifier just before the deadline. “And lo and behold, here we are,” he said.
He was only one shot ahead of Corcoran after the latter eagled the par-5 14th hole. Quiney, playing in the final twosome with Tam O’Shanter head pro Mark Brown, hooked his tee shot on 14 into high grass. He punched out into a terrible lie (“It looked like it was in a deer hoof print,” he said) but then hit to within 15 feet and made birdie. He followed with another birdie on 15 and finished with three pars.
“Very steady, very patient,” Brown said of the champion. “He’s got a good all-around game. Very good, I’d say.”
Posted by Listowel Connection at 07:30